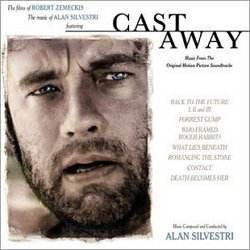 Cast Away: The Zemeckis / Silvestri Collection

It's hard to believe, but famed director Robert Zemeckis and award-winning composer Alan Silvestri have been working together now for over 16 years.  In that time, they've worked together on ten films, with the last two coming out just this past year.  Their latest film, Cast Away, only featured about 12-minutes of score in the entire film.  So what better way to release such a short score than to include in a retrospective compilation album, appropriately entitled: Cast Away: The Zemeckis/Silvestri Collection.

What an exciting album this truly is.  It begins with the "End Titles" from that fun movie Romancing the Stone.  It's peppy and upbeat, but it doesn't hold a candle to the next track.  Arguable one of Silvestri's most famous themes, "Overture" from Back to the Future is just perfect.  The orchestration, the brass hits, and the string work all come together to make this a truly classic movie theme.  Followed by Who Framed Roger Rabbit, a film that broke the boundaries of visual effects and animation in film, Silvestri's 1940's styled jazzy score is combined with thrilling orchestral drama and action.  After that one came Back to the Future, Part II, which didn't do much for me musically, since it just rehashed themes from the first film, but it did have some original moments (not really present on this one track, though).  Filmed simultaneously - and released the following spring, Back to the Future, Part III allowed Silvestri to score a Western in the Bernstein-style (as opposed to The Quick and the Dead which allowed him to do a Western in the Morricone-style).  It's big, bold, and fun.

Zemeckis had been working on a dark little television series for HBO called "Tales from the Crypt".  While Danny Elfman did the main theme, Zemeckis co-produced the series and even directed a few episodes (with Silvestri providing underscore, of course).  It was that style of dark humor and twisted comedy that followed in Death Becomes Her.  An amusing little film with a bewitching score that features a dark mood and evil violin.  It was the next film, though, that propelled both of these artists into the award spotlight.  Forrest Gump is a classic film about a simple man and his adventures in history.  It garnered an Oscar for Zemeckis, and a nomination for Silvestri.  The dramatic and emotional piano work continued into their next film, Contact.   During a break in filming Cast Away (Tom Hanks needed a few months to lose weight for the role), Zemeckis returned to the "Tales from the Crypt"-mode with his Hitchcockian thriller, What Lies Beneath.  Here Silvestri took on Bernard Herrmann and did a rather good job, with only a few moments falling into cliché.  Finally, their latest film, Cast Away, came about.

The score to Cast Away as mentioned before, is short.  There is no original music for the first 90-minutes of the film, and so when we finally do hear some music, it had to be just right.  Silvestri nailed it on the head.  The first time we hear this devastatingly emotional theme is at, well, a devistatngly emotional point in the film.  (I won't ruin it here for those who haven't seen the movie.)  The music does exactly what film music is supposed to do - take a heightened emotion and push it over the edge.  This music did just that.  A simple theme softly supported by strings never really builds, but just calmly plays out.  The cue chosen for the album, "End Credits" contains the soothing wave sounds heard in the film's end credit sequence, and it was an excellent decision to leave them in.  Some people have complained about the exclusion of the other 6-minutes or so of music, but it wouldn't have made much sense - they are really just this one theme repeated in small variations.

This is an excellent album overall.  While I might have made some alternate cue choices (something better from Back to the Future, Part II for instance), the themes certainly come through, and you get a sense of the growth and maturity that both Silvestri and Zemeckis have gained over the course of their fruitful collaboration.  Running almost 1 hour long, this album is certainly worth it - even if you have all of the scores included on the disc.