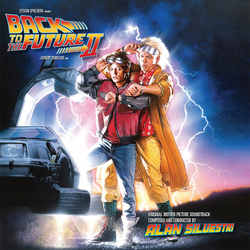 Back to the Future, Part II

The long-overdue expanded edition from Part II of the franchise, previously only available on a long out of print MCA album. The score, like the film, picks up where the previous film leaves off, but then quickly travels into darker territory reflecting the grim world of the alternate 1985. Things are dire in that 1985 and the score emotionally takes the listener there. It's a brooding and more contemplative work, up until the included teaser for Part III, which introduces the rambunctious direction the film and score will go in the final installment.

Unlike the analog recording for the first film, this was recorded digitally on the now defunct Mitsubishi ProDigi format, but fortunately Warner Bros. Sound still had a machine that facilitated the new transfer. The restoration was performed by the trusted hands of Mike Matessino, who assembled a 2-CD set of everything recorded. The first disc runs 65 minutes and features the score as heard in the film. The second disc of extras features alternates.