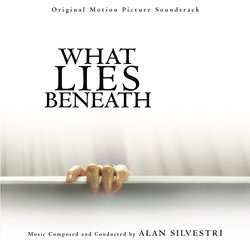 Review: What Lies Beneath

Alan Silvestri and Robert Zemeckis have had a collaboration that has been ongoing for over 15 years. Zemeckis is probably best known for his work on Back to the Future and Forrest Gump, but whenever I think of him, I am reminded of his significant involvement in a certain cable television series. Because of that, I knew what to expect with What Lies Beneath. This wasn't going to be a sneaky little movie from the director of Contact. No sir, this was going to be a frightfully giddy suspense flick from the director of Death Becomes Her and "Tales From The Crypt". Yes, that show. Zemeckis wanted to create a film in the vein of Alfred Hitchcock - and Silvestri's score is probably the most Herrmann-esque that he's done.

Beginning with the creepy "Main Title", we immediately get a sense of the film - dark, ominous, and truly suspenseful. I can't help but remember how well the score worked in the film - it helped scare the audience at the right moment, and with its trills and orchestra hits, it pushed the audience out of their seats. Silvestri has a few different types of cues. The darkly orchestral theme-based cues, large dramatic flourishes intermixed in orchestral environmental enhancements ("You Know"), and the pretty obvious Herrmann cues ("End Credits").

As Zemeckis did flawlessly in the film, Silvestri does an excellent job in manipulating the audience to his own end. He relaxes you with a softer dramatic cue ("I Opened The Door"), and then once you've settled in, he smashes you over the head with the orchestra in a cue largely inspired by Psycho and other Herrmann scores ("The Getaway"). It got to the point that when I was watching the film the audience knew that the score and the story were manipulating them, and they loved every minute of it.

While the film didn't get glowing reviews, I think Zemeckis and Silvestri achieved what they sought out to do - they created a fun film and score that pushes and pulls you in different directions, and you have a good time. It might not be Shakespeare, but it's entertainment. The album runs 30 minutes long, and while it could have been longer (if not for those pesky re-use fees), I think that it's nonetheless a satisfying listen. If you haven't seen the film, go do so - but remember, you're going to be played with. The score is worth picking up if you like Herrmann and Silvestri, and I would have to recommend it in either case.