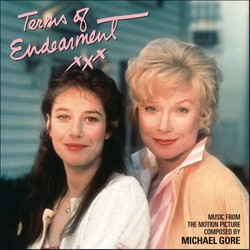 Quartet Records is proud to present the premiere release of complete score by Michael Gore for the deeply moving drama Terms of Endearment, a true Hollywood classic from the eighties, directed by James L. Brooks.

The film won five Academy Awards in 1984 (including Best Picture and Best Director; Shirley McLaine and Jack Nicholson also won for their magnificent performances), and was nominated for another six (including Michael Gore's original score)

The soundtrack album of Terms of Endearment was released by Capitol Records in 1983, and reissued on compact disc in 1986. The program included a portion of Michael Gore's score (specially edited for the album and mixed with film dialogue) and many songs heard in the movie.

Our 2-CD set presentation includes on disc one the complete score with every cue written by Gore for the movie, presented in film order (including several alternate versions), and the Richard Hazard recordings of song standards not included in the final print of the movie (replaced—in some cases—by the original versions).