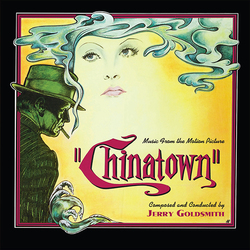 Jerry Goldsmith's score to Chinatown is a testament to his genius as a composer. Goldsmith urgently scored the film in merely 10 days, replacing an avant garde/period score by composer Phillip Lambro. Goldsmith eschewed any reference to the 30s setting, noting that audiences would figure it out without musical reinforcement, thereby freeing the music to work more deeply on the story. He immediately knew what kind of ensemble he wanted for the score: strings, four pianos, four harps, two percussionists and solo trumpet—the latter intended as its own character. Goldsmith wrote a bluesy, melancholy theme for solo trumpet for the film's opening titles, introduced with a distinctive effect of brushed piano strings, with harp and piano accompanying the trumpet melody. The languid sound of the trumpet suggested the period perfectly, while the rest of the score operates in Goldsmith's distinctively modernistic, 20th-century style—the universal language of mystery and suspense. It's hard to argue that there was ever a more perfect union of film and music.

Until now, all that has been available of this brilliant music was a blend of score and source standards spread across a brief 1974 album, produced by Tom Mack for the ABC label and running just 31 minutes. It has been issued twice on CD. Intrada presents an expanded edition of Chinatown, with the first 12 tracks presenting the original 1974 album, remastered from the stereo masters for a more suitable natural sound of the ensemble (previous CD releases altered the dynamic range and overall levels considerably). The remaining tracks offer the entire score for the first time in the intended picture sequence. These precious recordings have been mastered from what may be the only surviving session elements in existence: a pair of aging 1/4" seven-and-a-half IPS full-track (mono) rolls retained by the composer and transferred to DAT some three decades ago.