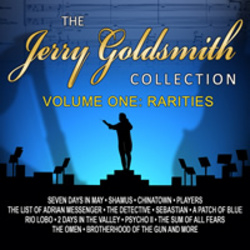 The Jerry Goldsmith Collection Vol. 1: Rarities features 23 tracks of new recordings of some of Goldsmith's rarely heard themes including a NEW recording of the score for Seven Days in May arranged by Dominik Hauser, the main title for Shamus, the composer's unused theme for the modern crime thriller 2 Days in the Valley, "Comes The Night" from the rarely screened spy thriller Sebastian, the theme from Rio Conchos in an exciting arrangement from composer Chuck Cirino, arranger Joohyun Park's fresh takes on Psycho II and Warlock, vocalist Katie Campbell's interpretation of the theme from The Illustrated Man, and "If We Could Remember", a song from one of the composer's final films, The Sum of All Fears. The Jerry Goldsmith Collection Vol. 1: Rarities also includes music from Shamus, Chinatown, The Detective, The List of Adrian Messenger, The Vanishing, A Patch of Blue, The Sand Pebbles, Players, The Omen, Papillon, Poltergeist and a new performance of the composer's Toccata for Solo Guitar performed by Gregg Nestor, who also performs on the main title for Rio Lobo.

Jon Burlingame writes, "this collection of newly recorded Goldsmith gems reminds us - as if we needed reminding! - that Jerry Goldsmith was not just a fine composer. He was a brilliant one, always serving the movie but at the same time creating music that could live apart from its celluloid origins. There was no one else quite like him."

The Jerry Goldsmith Collection Vol. 1: Rarities will also be released on compact disc as a limited edition release of 1500 units.