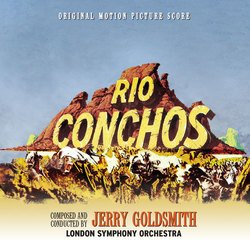 Intrada announces the second release of the Excalibur Collection in high-resolution digital. This release features the 1989 recording of Rio Conchos and The Artist Who Did Not Want to Paint under the baton of Jerry Goldsmith with the London Symphony Orchestra. The 24-bit, 96kHz hi-res format allows for a dramatic improvement in detail and depth in the quality of music over what one can hear with the the more common 16-bit, 44.1kHz CD format. The album has been remastered from the original session elements.

As with Ivanhoe, a limited edition CD release is also available from the new master to commemorate the release, available only until 6/21/2021.

When this digital recording of Rio Conchos was made on August 15 and 16, 1989, it was only the second time Goldsmith had taken an in-depth look at one of his earlier film scores. This exciting trip back in history followed the 1986 re-recording of his favorite work, the 1977 score for Islands in the Stream. Marking another debut of sorts, this new recording of Rio Conchos also brought Goldsmith face-to-face with the famous London Symphony Orchestra for the first time, a fortuitous encounter that launched the composer's subsequent series of live concert performances.

With Rio Conchos (1964), Goldsmith hit a landmark in his early career, fashioning a challenging score that was difficult to perform, and creating musical devices that would later become Goldsmith "trademarks." It was with this score that the composer developed his complex action writing. He also wrote virtuoso percussion material featuring, in particular, the snare and bass drum. The scoring called for large orchestra, augmented by guitars, banjos, harp and accordion. The large percussion section included such unusual instruments as bass marimba, crotales, jawbone and lujons.