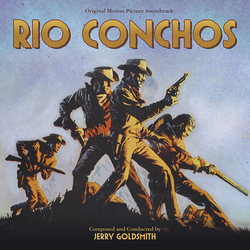 With Rio Conchos, Jerry Goldsmith immediately showed that he could score westerns with the best of them and it began a long and fruitful association with Twentieth Century-Fox. He would, of course, go on to score many other notable westerns. His score is hard-edged, fast-paced and action-packed, with a memorable main theme that is one of his best.

The original soundtrack was previously released on Film Score Monthly, with the entire score presented in mono with a handful of stereo cues, the only stereo that could, at that time, be saved due to extreme wow and flutter. But thanks to new technologies that have emerged in the last couple of years, Mike Matessino was able to go back to the original elements and perform a miracle of a stereo restoration for the entire score except for three cues—those three cues are presented so seamlessly you might not even be aware they are mono. The sound is amazing and really shows off Goldsmith's superb score in the best possible way.

This release is limited to 1200 copies.