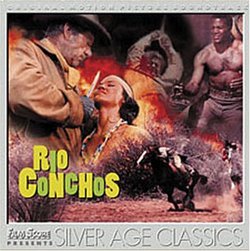 by David A. Koran January 8, 2000
4 / 5 Stars
As most reviews, as well as this one, will note that this is the original film soundtrack, compared to Intrada's re-recording, of Jerry Goldsmith's classic western score to Rio Conchos. The Intrada release was one of my first Jerry Goldsmith scores that I acquired on CD. I was extremely impressed with Goldsmith's versatility, which at the time, knowing mainly his sci-fi/fantasy scores of the late 1980s and early 1990s. Actually, the most impressive item on that early release was his near thirteen-minute piece for the travelling road-show "Prologue" version of The Agony And The Ecstasy (The complete movie was scored by Alex North). As mentioned earlier, the bulk of this release are the original mono tracks from the soundtrack as well as several bonus tracks (five of which are stereo recordings). Those who are hi-fi aficionados would most likely want to compare these bonus stereo renditions to the Intrada re-recording to get a better idea of the differences in quality as well as a mature conducting style (twenty five years passed between original and re-recordings).

If anyone ever needed to trace the origins of the western, musically, need to begin with items such as The Magnificent Seven, The Good, The Bad, And The Ugly, and others, including Rio Conchos. This is not to say that Rio Conchos is entirely groundbreaking, but its lack of referential material is very low, helping to give Goldsmith credit to defining the style of the music used most typically in western themed movies. The "Main Title is an unassuming but inspired little theme that starts off with a little guitar, bells, banjo and harmonica (what western doesn't have some of that) and broadens itself out with the inclusion of some strings. The point to pay attention to here is to the rhythmic measures Jerry introduces in the score all over the place. The main theme also appears in various incarnations, a phrase here, a passage or two there, all done seamlessly, true "classic" Goldsmith. Ethnically Goldsmith stays true (or as close as he can get) through the use of castanets and "Mexican-esque" stereotypical melodic phrases. Swinging between action cues and quiet passages, the score fills out the complete gambit of emotion and action throughout the film. In other words, exactly what a good film score should do, and in a western, lucky to do without sounding overbearing and melodramatic.

Ending with the bonus cues, including a vocal tune, fittingly titled "Rio Conchos", we get a good chunk of music on Film Score Monthly's eighth limited edition release. The liner notes, presented via FSM regulars Jeff Bond and Doug Adams, are copious and somewhat engaging, especially Doug Adams' essay covering the "invented histories" of the west. Knowing myself, that all these great Wild West stories only took place during, at most, a sixty-year section of our American history, it's hard to believe it was mined for as much as it was story-wise. An extra oddity at the end of the album, an Indian chant, appears about forty-five seconds after the start of the last track, listen closely or you may miss it. It's nice to see the folks at FSM having some fun with their productions, let's hope they keep it up!