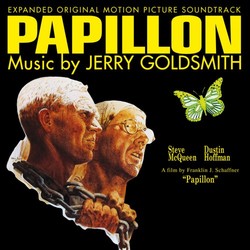 The sublime Academy Award-nominated score of Papillon is among the best and most celebrated of Goldsmith's scores, and one of his personal favorites. It features a memorable main theme (a "Montmartre-like tune"), Impressionistic passages ŕ la Debussy, intense and dramatic music, all colorfully orchestrated by Arthur Morton.

This new release has been carefully remixed and mastered by Mike Matessino from the recently discovered multi-tracks masters of the complete sessions, recorded in Italy and preserved in mint condition. It features every note Goldsmith recorded for the film, including music ultimately not featured in the final cut, extended versions of some cues trimmed during film editing, and alternates. There is also a generous selection of source music specially arranged by Alexander Courage and conducted by Goldsmith (these cues are quite important in the film, since they appear in Papillon's dreams and in the band concert during the escape).