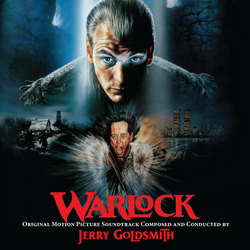 Jerry Goldsmith's score to the 1989 New World film Warlock combines his developing fascination with electronics with trademarks from earlier eras in his career.

Goldsmith wrote for a sizeable but judiciously utilized group of 70–80 players of the Victorian Philharmonic Orchestra in Australia. Both his complex, agitated string writing and rattling percussion recall earlier scores like The Mephisto Waltz and Planet of the Apes. The film's main title presents the score's three key elements. A dry, primitive-sounding utterance of Goldsmith's theme for the warlock opens the score, played by synthesizer, but with a sound not unlike the medieval instrument the serpent. His hymn-like theme for the character Redferne, also initially voiced by synthesizer, follows the warlock theme. And finally a repeating, percussive motif that will permeate the rest of the score is introduced, played by xylophone and other percussion—a signal for the presence and evil intentions of the warlock.

Goldsmith was not enthusiastic about the mixes made in Australia. At the time when Intrada prepared the original release back in 1989, rather than remix everything, Goldsmith requested Intrada assemble and master the LP and CD from the 1/2" four-track units but remove some of the electronic effects and woodwind colors assigned to the center channel where the problems were most prevalent. That left something of a vacuum in the final two-track stereo master. As a result, a then-generous 54 minutes of music with inherent compromises became the souvenir of Goldsmith's impressive work.

For this release, the original 2" 24-track session rolls were unearthed, containing all of the information that did not make it into the four-track units and allowing for a brand new mix from scratch, resulting in the first proper two-track stereo mixes with all of those previously missing tracks. The final results are an altogether different audio experience, putting on display all of those additional orchestral colors and myriad electronic effects. And yet there's more—now there is also a wealth of previously unreleased music to go with the stunning sonics—72 minutes in all!