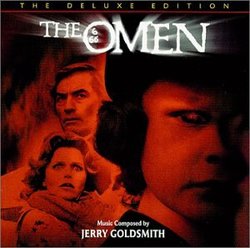 The Omen - The Deluxe Edition

Review: Omen: The Deluxe Edition, The

When Roman Polanski's film Rosemary's Baby was released in 1968, the floodgates were opened, and Satan became a major draw at the box office. Thanks to this film, numerous derivative films began to hit the screen at this time, and at least two made a major impact on American cinema. The first was William Friedkin's The Exorcist from 1973, which broke box-office records, and had audiences lining up for blocks. The second was Richard Donner's The Omen, which featured a landmark score by Jerry Goldsmith, and arguably set the standard for mainstream horror. Varese Sarabande has finally issued an expanded recording, marking the 25th Anniversary of the film's release. As a whole, the score can be looked at as an aural inkblot. During one listen, you may hear a tragic love story, which grows more and more desperate, as each cue progresses. Another time, you may find a Gothic orchestral and choral work, shot through with intense rhythms and chill-inducing choral passages. No matter how you look at it, the score is a classic, and thanks to Varese this recording offers an additional 15 minutes never before released, thorough track-by-track liner notes by Robert Townson, and incredibly improved sound.

"Ave Satani" opens the trilogy in a dark tonality right away, with the love theme (piano) quoted edgily against chorus, signifying the struggle between light and dark that will characterize the trilogy. The next cue is also the first previously unreleased piece, "On This Night". Here, Goldsmith introduces a sad 6-note motif in the strings, which will be heard throughout the score in many guises, and is usually associated with the anguish felt by Robert Thorn (Gregory Peck). The love theme closes out the cue, heard on piano, and is continued throughout "The New Ambassador".  "Where Is He?" reminds us this is a horror film, with chilled string and flute glissandi, which flourish into the love theme in high strings. This is a wonderful, yet brief, piece that was sadly missed the first time on CD. "I Was There", another newly issued cue, expands the "anguish" motif, into a 7-note dirge for low strings, winds, and bells for the scene where Thorn is informed of the truth surrounding his son's birth. "Broken Vows" is a highlight of the new cues, and was amazingly missed on the initial recordings of the score. This plays during the scene where Damien panics while his parents take him to church. The escalating rhythm of low piano's, scraper sticks, bass marimba and low strings, gives way to a full choral outburst, before fading into a fizzle of organ. "Safari Park" has been expanded to include the baboon attack music, which was also missed on other recordings. Essentially the same music as "Broken Vows", the attack rhythm from that cue is reprised here, yet the chorus is given a larger part, climaxing in a frenzied reading of the Latin lyrics by the chorus.

"A Doctor, Please", "The Killer Storm", "The Fall", and "Don't Let Him" follow, as they did on the original recording, although it should be noted that Varese has corrected the sequence to follow that of the film. The next new cue, "The Day He Died", opens with an ominous variant of the love theme, heard on timpani, piano, and sliding bass strings, furthering the sinister atmosphere as Jennings (David Warner) predicts his own fate. "The Dogs Attack" and "A Sad Message" offer alternate moments of terror and heartbreak, while "Beheaded" contains the previously unreleased scoring of Jennings' fate, with a crashing reading of the choral theme, which segues to dark strings, and a rare moment of repose from the chorus. "The Bed" was previously combined with "A Doctor, Please" to form "The Homecoming" on the original CD, and this cue offers one of the most emotional moments of the score. Flute and harp glissandi lead to the love theme on piano, heard against high trilling violins, signaling the measure of tragedy the story has taken. "666" is the final new cue, sounding a brief stab of strings and moaning winds, culminating in a shriek of flute and vibes, for the scene where Thorn discovers his son is the Antichrist."The Demise of Mrs. Blaylock" follows immediately, and this famous horror cue has never sounded better, sonically, with a terrific balance of rhythmic orchestra, high violins, blistering brass, and whispering chorus. "The Altar" brings the score proper to a close, although sadly the alternate take is all that exists, with the film version reportedly lost. The second half of the cue contains the actual main title, a shorter rendition of "Ave Satani". "The Piper Dreams", sung by Carol Goldsmith closes the album. Although the vocal still sounds as if it was recorded with far too much reverb, it closes the album nicely, shifting the focus onto the love material.

Longtime fans of the composer will find this new release infinitely improved over the original Varese CD. Previously, The National Philharmonic Orchestra and Chorus sounded more like a chamber group, thanks to miking that was a bit too tight and somewhat restrictive of the forces the composer assembled. Here, it almost sounds as if the composer was allowed to return to Abbey Road in 1976 and record the score anew.

While the score may not be to everyone's taste, it's hard not to react to the emotions on display, and The Omen is easily one of the most effective horror film scores ever created. Kudos to Varese Sarabande for recognizing this landmark piece of film music history.