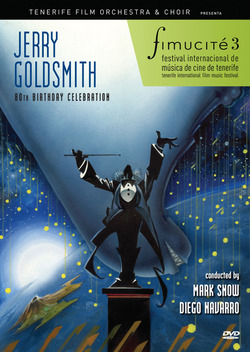 Had we not lost the great Jerry Goldsmith so pre-maturely in 2004, at the ages of 75, he would have turned 80 in 2009. To remember and celebrate the legendary composer on this very special occasion, producer Robert Townson and the Fimucité festival in Tenerife staged an extraordinary concert. It's never possible to represent all of Goldsmith's classics in any one concert. The idea here was to focus on Jerry's music for science fiction and horror films. This opened the door to include some pieces that don't get as much concert attention as the obligatory (though masterful and much-loved) Patton, Chinatown and Rudy.

This meant we could offer premiere concert performances of neglected gems such at The Illustrated Man, The Swarm and The Final Conflict. We could even shine a rare spotlight on Capricorn One, The Sum of All Fears and even The Omen! Rounding out the blockbuster program was music from fan-favorites Planet of the Apes, Star Trek: First Contact, Gremlins, Poltergeist and Total Recall!

It was a remarkable evening which also included a special award to Jerry Goldsmith, accepted in person by his wife, Carol.

Conducted by Mark Snow and Diego Navarro, the Jerry Goldsmith 80th Birthday Tribute and Celebration was a glorious evening and it can now be shared with fans of the composer's work all over the world.

This 2-disc set includes a DVD of the concert and a CD of just the music. A beautiful DVD booklet (something that seems to be being left out of all but the most elaborate collector DVD sets these days) is also included.