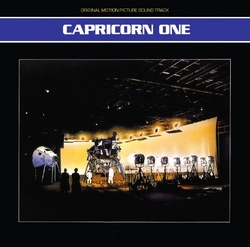 Perseverance Records is proud to announce the reissue of Capricorn One by Jerry Goldsmith. Originally released by Warner Bros Records in 1978, this album featured a re-recorded version of the score by the maestro with the National Philharmonic Orchestra. At that time there were a few examples of this being done for LP release. John Williams' score to The Fury comes to mind.

Many who have the previous LP or the GNP/Collector's Choice CD reissues will say that this is a must have for those who own the limited edition score from Intrada (which is the score used in the film).

Warner Music handed us the remastered disc. The sound is as good as the Collector's Choice reissue. In many ways this is a continuation of that release since CC Music went out of business not too long after this came out.

Limited to 3,000 CDs. This is a straight reissue of the original album. To reiterate, Jerry went to London to re-record this score with the National Philharmonic. This is a different take, and a very good, re-recording of the film score. Original LP art.

We hope you will enjoy this reissue. As fans of Jerry Goldsmith this was a nice opportunity to offer this to fans who missed out on the out of print CC Music and GNP releases. Enjoy!