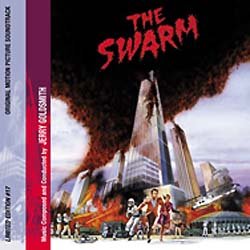 At the time, Jerry Goldsmith scored The Swarm, he was riding high off his Oscar win for The Omen and other brilliant scores of that time, such as Oscar nominated gems such as Wind and the Lion and Islands In the Stream. However, it is 1978 that most Goldsmith aficionados remember most for the quality of work that he produced that single year with brilliant and exciting scores for Capricorn One, Coma, Damien: Omen 2, The Great Train Robbery and the Oscar nominated Boys From Brazil. But it is his breathtaking score for The Swarm that everyone remembers most because of its association with one of the biggest disaster flops of the 1970's.

Goldsmith's score has stood the test of time, while the film was forgettable at best. Director Irwin Allen had scored big with both The Poseideon Adventure and The Towering Inferno, both of which were scored by John Williams, but when it came time to score The Swarm, he was unavailable due to previous commitments. Goldsmith, who hadn't worked with Allen since the television series, "Voyage to the Bottom of the Sea", took the job. While the film was critically lambasted, Goldsmith's score was justly praised. At the time of the film, Warner Bros. released at 36 min. LP featuring the score's many highlights and sadly had never been issued on CD, leaving a gaping hole in Goldsmith's discography.

Now with the film's 25th Anniversary and a newly released DVD, Prometheus Records has released this wonderful score and fills in missing release from one of Goldsmith's best years. The score is just bursting with excitement from start to finish, but it does let you breathe a bit amidst all the chaos going on. Many themes abound here and Goldsmith's simple three note motif simply stated as B-low E-high E (BEE, get it?) is the score's main thematic pulse and with Arthur Morton's excellent orchestrations, the Hollywood Symphony performs this very difficult score with gusto. The album gets off to a quick start with "Main Title / Red One Reporting" with it's busy woodwind and brass fanfare which quickly segues into a simple military motif closely resembling the one from Damnation Alley. "The Black Mass" immediately follows the Main Title and follows it up with pounding percussion, shrill brass and the introduction of a synthesizer motif that appears at times throughout the album.

"The Bees Arrive" is one of scores more memorable pieces, starting out with swirling brass and woodwinds that quickly segue into a wonderful string led ballet, which makes you see why Goldsmith's score is so good, and where this film would be without it!

The last seven tracks of this album are non-stop Goldsmith action-mania, with a few tender moments in between for relief. "Exact Instructions" (my favorite of the bunch), starts out in a reflective and quiet mood with it's clarinet solos and hushed strings, which slowly start to build the tension of the scene as the bee motif makes another appearance at around the three minute mark. It's very reminiscent of the finale from The Boys From Brazil.  Overall, it's very exciting stuff!

The score is also filled with many quiet moments amidst this orchestral storm with cues such as "Oh Walter!", "Rita and the Doctor", and "Brad and Helen" to name a few. The album closes with the jubilant "End Title", which is now infamous for the ending of the film in which all the scientists are dancing in the streets of Houston like idiots as they celebrate the destruction of the swarm of killer bees.

The CD is very lengthy at 73 minutes and it's might be best to give yourself a break or two while listening to it. The sound quality and liner notes by Gary Kester are superb and very detailed track by track, which shows that the producers took very special care with this score. You have to commend Luc Van De Ven and Prometheus Records for valiantly rescuing this score, whose release was a long time coming and has now become an absolute essential to Goldsmith aficionados and soundtrack collectors alike. At 3,000 copies, this will not last too long.