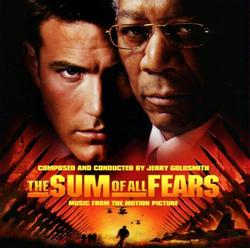 The Sum of All Fears

Review: Sum of All Fears, The

Tom Clancy's heroic figure, Jack Ryan, has graced the big screen in three incarnations thus far.  First by Alec Baldwin in The Hunt for Red October (with a score by Basil Poledouris), then twice by Harrison Ford in Patriot Games and Clear and Present Danger (both times scored by James Horner).  For his fourth visit to the cinemas, Ryan got a bit of a makeover.  The character was made younger - now just a CIA analyst - and Ben Affleck took over the role.  The premise in The Sum of All Fears revolves around a neo-Nazi splinter group who decides that it would be easier to dominate the world if they could start a nuclear war between the United States, and Russia.  In a tense thriller reminiscent of Fail Safe, director Phil Alden Robinson (Sneakers, Field of Dreams) examines how far each side might go before the point of no return is crossed.  Interestingly enough, this time around, his frequent composer, James Horner, didn't provide the score.  Instead, the music was provided by maestro Jerry Goldsmith.

The score Goldsmith provides for The Sum of All Fears is for the most part rather enjoyable, but comes across as uninspired some of the time.  The main title sequence is scored by "The Mission", and has to be one of the best cues Goldsmith has written in years.  A solo soprano sings mournfully in Latin, and as the cue progresses, the orchestra and full choir back her up.  It's reminiscent of what he did in First Knight, and while this theme doesn't show up much in the score (just at the beginning and end of the film, really), the sheer beauty of it makes this one to hit "repeat" on.  The film does have a small Middle Eastern element (interesting since the book almost entirely involved a Middle East plot), and Goldsmith takes advantage of those small moments ("The Bomb", "The Deal", "His Name Is Olson") to add a bit of ethnic flare to his score.

Let's not forget the Russians, though.  Almost a continuation of what he started in Air Force One, Goldsmith uses a dark brooding orchestra, as well as strong brass-heavy Russian-sounding themes accented with choir ("That Went Well") to remind us of the power that this large country still has.  This is also an action film, and Goldsmith knows how to get the blood pumping with the tense strings and pounding percussion in "Clear The Stadium".  "Changes" and "Snap Count" are mildly dramatic yet slightly mundane cues that are pleasant enough, but just seem to pad out the album a bit.  "Deserted Lab" has an interesting synth effect panning between the speakers, amidst the tension.

"Real Time" and "How Close?" cover much of the climax of the film, and the music ranges from more tension, military drama, and the use of the brooding Russian theme as well as the pounding piano works rather well.  The main title theme finally shows up again (after being absent for the entire score) in "The Same Air", bringing a nice bookend to the album.

Did I say "bookend"?  My error - there are songs on this disc, too!  That wonderful main title theme that Goldsmith wrote is also a pop song, sung by Yolanda Adams.  "If We Could Remember" has the right sound and production value to no doubt get plenty of air-time.  Toss in a random song by Tabitha Fair ("If We Get Through This") and the now overly cliché "Nessun Dorma"-to-be-used-over-a-montage sequence, and then the album is complete.

Is this an album to run out and get?  I probably wouldn't push it on anyone so quickly, but that main title theme in "The Missions" is truly worth the price of the disc.  Couple that with the satisfying score, and the songs (which are enjoyable after a while), and this album will happily find a place to live amongst your collection.