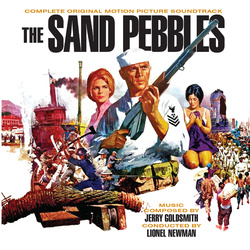 Score itself has truly interesting architecture: Goldsmith creates not one but two distinct main themes, yet draws each from the same first four notes! Go one direction, get his military theme for titular gunboat, go the other direction, get his famous major-key love theme for Jake (McQueen), Shirley (Bergen). In addition, composer creates haunting minor-key secondary theme for Frenchie (Attenborough), Maily. Highlights are many but getting spotlight is premiere release of brief all-important cue where Jake first sees "San Pablo" on docks at night. It is here Goldsmith introduces his four widely-spaced notes on French horn, launching military theme that anchors score. Another highlight is premiere release of aggressive, action-oriented alternate for "Commence Firing". Sequence was re-scored, toned down for final production. Both versions are presented here.