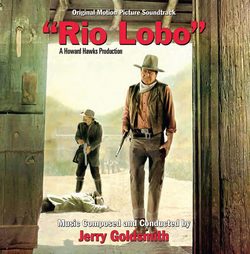 La-La Land Records and CBS are proud to announce the reissue of another classic Jerry Goldsmith Western score of Rio Lobo, starring the one and only John Wayne.

About a year ago I was going through my Goldsmith collection and realized I missing Prometheus' wonderful Rio Lobo release. I immediately jumped online and went to eBay only to discover the CD was going for $60.00! I said, "The hell with that! I'm not paying $60 for a CD... but I will pay several thousand to license it again!" (Sometimes, it's good to own a record company.)

Please note: This is not an exact reissue—the sound has been improved and tracks have been added/shuffled around. For this release Tracks 1-14 feature the score in mono. Tracks 15-24 features various source cues recorded for the film. Track 25 is an alternate cue and Tracks 26-30 feature the only surviving stereo cues. This 78 minute long presentation contains in depth liner notes by Goldsmith scholar Jeff Bond and eye-popping art direction by Mark Banning that would make the Duke proud.