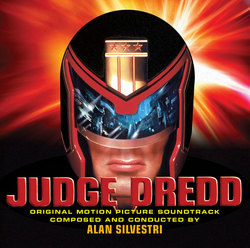 For this release in its Special Collection, Intrada presents the completely restored score for the 1995 film Judge Dredd composed by Alan Silvestri on this 2-CD set. The scoring of the film was no small feat, first recording the score in London, then returning to Sony Studios in Los Angeles to record more. Including all of the rewrites and alternate material, Silvestri composed and recorded over two hours of original music for a film that ultimately ran just 96 minutes. Nearly all of what is heard in the film came from the LA sessions.

Epic Records released a soundtrack album at the time of the film's theatrical run in 1995. Some 40 minutes of Silvestri's score shared time with five songs by various artists. Most of those 40 minutes, all drawn from the London sessions, went unused in the finished film. Nearly 70 minutes of actual film soundtrack can be heard on CD one for the first time apart from the film. The second CD offers the alternate material, including cues appearing on the original 1995 soundtrack release.

The original Epic album included a considerable amount of reverb, providing rich sound but diminishing the inner detail and clarity of the various orchestral colors. The audio was also "normalized," meaning some compression was used to "flatten out" the overall dynamic level of each cue, allowing the entire album to be mastered at "hotter" levels across. It was a perfectly acceptable creative decision that is commonly in use today, especially when loud vocals share disc space with the orchestra. Since this release had no songs to deal with, Intrada retained the wider-ranging dynamics that the composer and his musicians delivered without compression. The loudest peaks in this new Intrada release are identical with the 1995 release but now yield wider contrasts with the softer passages. Regarding reverb, although a subjective preference, Intrada tends to be conservative with its application. While listeners familiar with the 1995 album may find it plays louder throughout, they will find this current release offers more nuances in the levels and more clarity in the orchestral details.

As one final bonus, this release includes Jerry Goldsmith's recording for the film's theatrical trailer, which debuted four months before the film's release.