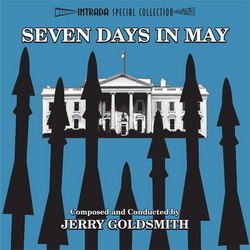 Seven Days In May / The MacKintosh Man

John Frankenheimer's emphasis on realism in the 1964 production [M]Seven Days in May[] provided composer [C]Jerry Goldsmith[] with an unusual challenge. Goldsmith gave the film what is likely his shortest score for a feature film—only a handful of cues totaling eleven minutes in the finished film.

After a tense main title (with drums evoking the role of the military as the film's "bad guys"), Goldsmith's music appears only occasionally, and always to help maintain tension. He contributed longer cues for two major sequences: a suspenseful scene of trailing to a secret rendezvous and exciting music for a daring escape from a secret base.

His score features simple motifs and distinctive rhythms rather than fully developed melodies, using similarly sparse orchestration, featuring only pianos and percussion; its closest cousin in the Goldsmith oeuvre is his music for the "Time Out" segment of Twilight Zone: The Movie. Intrada's release features the premiere release of the score in stereo, including a few minutes of score not used in the film and an alternate main title, all totaling 17 minutes.

For the 1973 Warner Bros. film The MacKintosh Man, Maurice Jarre provided a distinctive and memorable main theme reminiscent of his then-recent score to another international espionage thriller filled with moral ambiguity, Alfred Hitchcock's Topaz. The theme has a strongly European flavor befitting the setting, with prominent use of the cimbalom, a zither-like instrument whose unique sound has been a memorable part of the soundscape of such spy films as The Ipcress File. For the first part of the film, the music glides along dispassionately, but once Paul Newman's hero Joseph Rearden's mission goes south, Jarre drops the detached approach and lets his music reflect the hero's state, providing eerie, unsettling variations on his main theme.