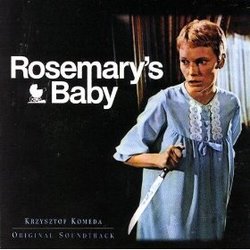 "What have you done to its eyes!?"

It\'s not as well known now, but this line is up there with "I see dead people," and "We\'re gonna need a bigger boat," as great film lines. Now a classic, Rosemary\'s Baby is many things. You could call it The Sixth Sense of it\'s time: a low key thriller with a shocking twist. Itinfluenced many occult horror movies that exploded into Hollywood after its success. It would bring Peyton Place\'s Mia Farrow stardom. Along with Chinatown, it\'s one of Roman Polanski\'s great Hollywood triumphs. And it was one of the last (and greatest) film works of composer Krzysztof Komeda, a regular collaborator with Polanski.

Polanski\'s approach was to treat the horror as realistically as possible. He let the paranoia slowly emerge from the bland ordinary settings and Komeda combined jazz, 60\'s pop and unique gothic orchestra to a truly disturbing effect. Komeda used the random instrumentations in jazz to suggest the growing anxiety of Rosemary\'s state. This is much like his previous score for the cult horror-comedy Fearless Vampire Killers: Or Pardon Me But Your Teeth are in My Neck (another score worthy of picking up). In the previous film, these stylings were being experimented with and here they are finally fully developed.

Rosemary\'s Theme ("Main Title") is the lullaby that unites the score. It\'s gentle theme with a female vocalist. You know it is a late 60\'s score because she goes "La la la" through her solos. Much of the dramatic meat is the genuine sweetness of the happy domestic cues ("A New Home", "Nursery Preparations", "Expectancy", "Christmas Shopping") and the contrast of growing darkness around it. The evil (represented in "The Coven - Parts 1 & 2") is personalized through demon chants and an atonal flute whistle. In "The Dream" and "Morning Sickness" ghostly chorals vibrate through echo chambers and strings modulate uneasily. Mixed in are plenty of great suspense cues. ("Through The Closet" and "The Anagram"). Komeda\'s range is proved further through his dead-on version of 60\'s pop in "Party Music" and country/western "Hoedown Music". This culminates in one of the greatest horror cues even written (\'What Have You Done To Its Eyes?"). It is up there along with "Chrissy\'s Death" from Jaws and Psycho\'s "Shower Cue". Horns blare with a cruel mocking warble, like a cruel laugh at Rosemary as she discovers the truth.

The album is a very packed release, including an alternative version of the title, a very dated Jazz version of the theme (which is very good or very bad, depending on your sense of kitsch). Most interesting are original rehearsal recordings ("Main Title - Rehearsal 1" and "Main Title - Rehearsal 2") which in the piece plays very simply and effectively on the piano. This is exciting because in "Rehearsal 2" you almost feel Komeda discovering notes as he goes along through the rehearsal.

Polanski worked hard to bring Komeda to Hollywood and introduce him to state-side success. Though his potential was never fully realized, his work would greatly influence others, including Jerry Goldsmith. As an album to discover Krzysztof Komeda\'s genius, this is the place to start.