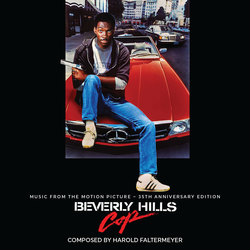 La-La Land Records, Paramount Pictures and Universal Music Special Markets presents the 35th Anniversary re-issue of renowned composer Harold Faltermeyer's original motion picture score to the legendary 1984 Paramount Pictures action/comedy Beverly Hills Cop starring Eddie Murphy, Judge Reinhold and John Ashton, and directed by Martin Brest. Composer Faltermeyer defined the 80's film score pop-synth sound and Beverly Hills Cop is arguably his most iconic work – and certainly his most influential, as its infectious themes and compositions have continued to inspire throughout the decades into the present day. The original film score is showcased in this deluxe presentation, which also includes bonus tracks—and the original soundtrack release's most notable songs, featuring the sizzling "The Heat is On," performed by the late Glenn Frey (written by Faltermeyer and Keith Forsey), the hold-on-for-dear-life-truck-chase "Neutron Dance," performed by The Pointer Sisters and more! Produced by for La-La Land Records by Dan Goldwasser and mastered by Doug Schwartz, this limited edition re-issue of 2000 units includes exclusive, in-depth liner notes by writer Tim Greiving, with new interview quotes from Faltermeyer, and Rodeo Drive-kind-of-classy art design by Goldwasser. A must for all film music fans. It'll sound great blaring in your car – even if there's a banana stuffed in your tailpipe! (Aside from the anniversary notation on the front cover art, this release features the identical content and master as found on our 2016 release)