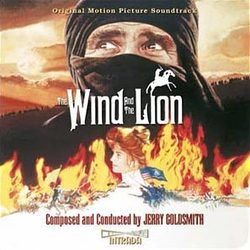 The Wind and the Lion

Review: Wind and the Lion, The

One of best surprise releases of the year cannot receive less than the highest rating from me. Even without this newly expanded and remastered version from Intrada, The Wind and The Lion has and always will be upheld as a high water mark of Jerry Goldsmith\'s career; it is simply now that much more evident. By way of a fruitful collaboration between Intrada\'s Doug Fake and FSM\'s Lukas Kendall, both leaders of their respective labels, the original complete elements of the score were uncovered in 2006, thus allowing a 2-CD presentation of the music from top to bottom, including a variety of source cues. As a bonus, the original LP version has also been cleaned up and included, allowing listeners the option to still enjoy Goldsmith\'s succinct, riveting 40-minute presentation of the score\'s highlights.

The expansive liner notes by Fake, Kendall and Jeff Bond detail many aspects of the production, a track-by-track analysis of the score and discussion of how this release happened. It\'s tough to find a serious Goldsmith fan who would not place The Wind and The Lion somewhere in their personal top 10 or 15 favorites by the composer. Even the film itself has much to recommend and enjoy. The 1970\'s overall were a decade of major accomplishments for Goldsmith, as he not only received his highest number of Academy Award nominations, but the imagination, inventiveness and emotion he imbued into each score seemed boundless. The Wind and The Lion provided him a broad canvas usually reserved for the Western genre, allowing for rich melodicism, explosive action and intricate orchestration, but even Goldsmith\'s own Western scores could be brooding and introspective while this galloping adventure wore it all on the sleeve.

The "Main Title" opens in alarming fashion with pounding drums, clanging fire bell and the signature component of the score, an aggressive, open-fifth clarion call in the horns, which becomes the backbone for most every aspect on display here except perhaps the love theme and ancillary textures. Percussion endemic to the geographical region also plays a major role, something Goldsmith excelled at in incorporating into scores which required specific ethnic color. And as heard in kinetic action set pieces such as "The Horsemen Arrive" and "Raisuli Attacks", the mix of uncompromising brass and percussion really raised the bar when it came to exciting film music. Though the tonal qualities differ, as do the genres, one could even draw links between the rambunctious, percussive energy of Goldsmith\'s Planet of the Apes, to 100 Rifles and then onto The Wind and The Lion, but part of the joy in being a fan of the man\'s work is uncovering the development of his techniques and approaches across such a wide range of musical variety.

The open fifth figure also kicks off the theme for President Roosevelt, linking his character to Sean Connery\'s aggressor Raisuli in more ways than that of each other\'s nemesis, but on a deeper, philosophical level; the former hidden behind the walls of the White House and attacking by proxy, while the latter demonstrates his will by his own hand. Other gems of the score include the stately theme for America, softer, shimmering textures evoking romantic notions of the region and its history and of course, the impassioned love theme. Admittedly, when I first saw the film I found it difficult to buy into the burgeoning relationship of Candice Bergen\'s character, Mrs. Pedacaris, and Connery\'s Raisuli. I was already very familiar with the score and its wonderful love theme for them so perhaps I imprinted a more overt romance between them before realizing that it is a more subtle and conflicted dynamic being conveyed. This is what Goldsmith was able to capture and interestingly the same theme also underscores a brief scene of Mrs. Pedacaris\'s young son William remembering his adventures with Raisuli, so one could argue that the theme reflects more the entire family\'s surprising bond with their captor.

Some of the highlights now premiered on this release include the wonderful traveling cues "The Riff; The Well", variations on the "Raisuli Attacks" action motif in "The Camp", the strange sound world in "The Blue People" and martial strains heralding the American Army\'s arrival into Tangiers. The scope and sweep of the score engages throughout its length by way of its muscle, beauty and nobility, all on display in unabashed fashion and qualities that had been pent up inside Goldsmith during the first half of the decade, not allowed to all roam free at once since perhaps The Blue Max and The Sand Pebbles. Obviously a must have for die-hards, but recommended as well to casual fans who might be hesitant about dipping into Goldsmith\'s sizeable back catalog of treasures.