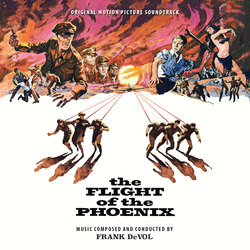 The Flight of the Phoenix - Expanded

For its latest release, Intrada features a completely restored 2-CD set of Frank DeVol's The Flight of the Phoenix. Hailing from 1965, this 20th Century Studios release was in the midst of a stunning period for film music with both old guard (Rózsa, Tiomkin, Steiner to name a few) and new talent (Barry, Goldsmith, Jarre, to also just name a few) on the scene, resulting in a wealth of powerful scores featuring both classic and modern sensibilities. Composer Frank DeVol was part of this crew, providing remarkable work, and yet somehow without many album releases, missed much notice. The Flight of the Phoenix is a showcase for DeVol's power as a composer, featuring a sweeping, Middle-Eastern flavored theme for the exotic, yet remote, setting. Although largely taking place in a single location, DeVol musically captures the location, the inner and outer drama of the characters, and seeming hopelessness of their situation. The result is an exciting, dramatic, heartbreaking and ultimately heroic score from someone who remains an underrated composer.

Restoration specialist Chris Malone mastered this expanded edition from 35mm magnetic tapes provided by 20th Century Studios. The score proper has been restored in vibrant stereo. The bonus section also features a few alternates, including a longer Connie Francis vocal of "Senza Fine," accompanied by only piano, guitar and bass, and two versions of the concluding cue, "Ole Swimmin' Hole."

The film stars James Stewart, Richard Attenborough, Peter Finch, Hardy Kruger, and Ernest Borgnine, making up most of a crew who take off from a Jebel Sarra Arabco oilfield in a Skytruck, a utilitarian transport plane, headed to Benghazi. Because of an inaccurate weather report and a miscalculation by the pilot, the plane is overcome by a sandstorm and crashes in the central Libyan desert, instantly killing two of the passengers and leaving one grievously wounded. The film becomes a tale of relationships under dire circumstances, survival, and ultimately a creative escape—all based on a true story.