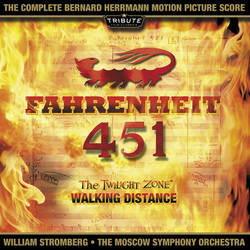 Fahrenheit 451 (1966) was Francois Truffaut's film adaptation of Ray Bradbury's dystopian novella about a future totalitarian society where books are forbidden. Guy Montag (Oskar Werner) is one of many firemen whose job is to burn all printed matter, but when he decides to steal and read a book, his world view turns upside down. He leaves his former way of life and escapes to a new world of 'book people.' Julie Christie plays both his vain wife and the woman who begins his liberating journey.

"Not only does this score contain some of Herrmann's most beautiful and moving film music since The Ghost and Mrs. Muir and Vertigo, his harmonic language is filled with surprises on every page and is quite unlike anything he had previously written," John Morgan said. "Because of all the dropped music and low dubbing levels [in the film], listening to this complete recording of Fahrenheit 451 is like discovering a new Herrmann score. For me, it is the composer's last great masterpiece."

The companion piece on this CD is Bernard Herrmann's sensitive, poetic score for The Twilight Zone episode 'Walking Distance' about a jaded executive who visits his hometown only to find it exactly as it was when he was fifteen. It was Herrmann's third score for the series and originally composed in 1959 for small string ensemble and harp. For this recording, the strings have been expanded for full orchestra, along with a second harp for balance, creating a completely new dimension to the work. No notes have been added, and the voicing remains Herrmann's own.