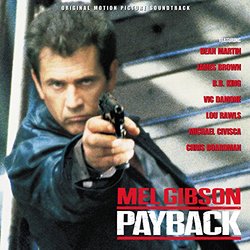 I had just been wondering what had happened to such dark gritty films like Dirty Harry and The French Connection when I heard about Payback. This was supposed to be the movie that returned to the low-saturation, grainy, gritty, and dirty-feeling films of the late 1970's. The movie itself was rather decent, with some nice plot twists, and enough moral ambiguity in Mel Gibson's character to make me smile. But it was the score and songs that caught my ear.

had a great film teaser timed perfectly to Dean Martin's "Ain't That A Kick In The Head". Of course, that was before the film was changed considerably, a character removed, another one added, and a new ending was tacked on. But the trailer used the song so wonderfully, that I was glad finally to have it on CD - it did appear briefly in the film, so that's deserved. A few other songs which appeared in the film make their appearance on the soundtrack, including "Smoke Gets In Your Eyes", the classic "Luck Be A Lady Tonight", and "You're Nobody Till Somebody Loves You".

Chris Boardman's score is interesting because it mixed a late 1970's approach to scoring with a contemporary suspense score. The funky bass guitar, percussion, and horns in the main theme were derivative of David Shire's The Taking of Pelham One-Two-Three, but I think it worked for the film - it was, after all, a "return" to the dark films of the 1970's. Only four tracks of score are provided on the CD, giving us a whopping 15 minutes. The re-use fees couldn't have been that expensive, could they? These three other tracks contain some suspenseful guitars, brooding strings, driving percussion, and even some organ work. It seems like a pretty good score, but it's so hard to say given the small amount of music available.

It's probably worth waiting to see if there's going to be a promo score to hear the remainder of Boardman's "homage" to the 1970s. But barring that, you're probably better off getting The Taking of Pelham One-Two-Three to satisfy the craving you might feel for a dark 1970's film score.