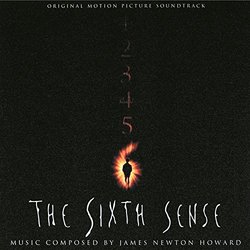 Of what score have we more often heard, "It works wonderfully in the film, but isn't so great on it's own" than The Sixth Sense? Well, I'm here to remind you that a film score's primary function is to serve the film for which it is written, and as such, James Newton Howard's The Sixth Sense is a nigh-perfect example of superior craftsmanship. And maybe it's just me, but I also think that it makes for quite a listening experience.

James Newton Howard has professed to be a fan of the likes of Lutoslawski, Ligetti, and Penderecki, and anyone familiar with their musical stylings will certainly hear the homage in "horror" cues like "Suicide Ghosts" and "Hanging Ghosts." There is a main theme that runs through the score, as well as a secondary "love" theme. Though they're not Howard's strongest thematic gestures by far, they work very well at what the film strove for—subtlety. This main theme is first heard in "De Profundis," and makes notable returns in "Malcolm's Story" and the film's grand finale. (Note: for those collectors who found themselves buying the album before seeing the film, the name of the last cue on the album came as quite an unpleasant "spoiler.")

The last two cues on the album are it's highlights. "Kyra's Tape" features some haunting choral work reminiscent of The Devil's Advocate. As for the finale, it's the culmination of all of the fine examples of perfect mood, presence, and timing displayed in the score. Every revelation onscreen has it's musical counterpart, and the simple "love theme" is put to beautiful use to bring the film to a close.

In brief, this is an album which perfectly captures the mood of a film whose success was almost entirely due to it's mood. James Newton Howard proves himself once again a master of his craft.