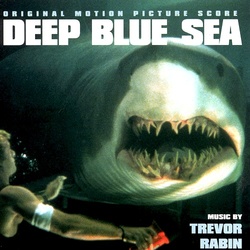 Trevor Rabin's entrance into film scoring in the late 1990's developed his name as a solid action score composer, often collaborating with Jerry Bruckheimer. His blending of synthesizers, orchestra, and his own electric guitar performances made for a blockbuster sound, but that is, for the most part, the extent of his filmography. Recently, with scores such as National Treasure, Rabin has continued to deliver action scores without offering anything really new for the listener.

But looking back to 1999, Rabin composed the score to a science fiction thriller that met Jurassic Park and Jaws somewhere in the middle. While Deep Blue Sea was an easily forgotten film (for those of you who don't have soft spots for cheesy underwater action films!), Rabin ended up writing one of his best scores to date. Varese Sarabande released the score separately from the rap album that featured LL Cool J's "Deepest Bluest (Shark's Fin)" in an under-thirty minute CD with the cues in a completely out-of-sequence order. While I have seen the film enough times to have put the cues in order, I will discuss them as they appear on the album.

"Aftermath" comes at the end of the film, but opens the album nicely by presenting Rabin's main theme in a sweeping orchestral treatment. The other major performance of this theme is on the electric guitar in the action cue, "Anarchy", which is actually used twice in the film, once when the sharks first begin to attack and then again at the finale. The theme fits both styles of music and it is too bad that it is not used more. The second theme in the film is a three note motif that is used often. The third cue on the album, "Journey", leads up to the finale of the film, which presents a rousing version of the main theme performed by the French horns and backed by a synthesized choir.

Some of the slower cues on the album are what make it stand out from Rabin's usual action writing. "Hunting in Packs" creates a murky feel for the underwater scenes of the sharks, the "world of silent monsters" as the film puts it. There is one other motif that is used as a foreshadowing to danger and is a repeated pattern of short notes. This cue is first heard in "Experiments" in the film, but appears often on the album. This track also contains an uplifting horn cue at the end when the experiment works... then the sharks start attacking! A longer and more sequential album would have been nice, but either way, it is great to hear Rabin tackle a science fiction/horror film. Deep Blue Sea might have been forgettable - for most people - but Rabin's score is definitely one to check out as it is one of the composer's best.