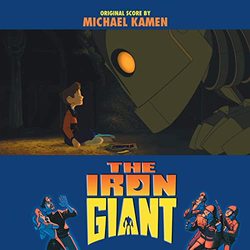 In his first score for an animated film, Michael Kamen decided to take his experience over the past twenty-years and try to bring it to the next plateau. The Iron Giant afforded him a great opportunity to go beyond the typical Hollywood schtick that he had almost fallen into. As of late, his scores haven't been anything groundbreaking. While they have tended to be rather enjoyable (From the Earth to the Moon, Lethal Weapon 4, What Dreams May Come), they didn't do anything that we hadn't heard before. The Iron Giant was a great piece of film (which sadly got overlooked by many) and it was up to Kamen to provide the emotional core through the music. He does everything right – the orchestra is large and powerful, the music is sweeping and emotional – but the lack of a central theme makes this score sound like underscore.

The first track, "The Eye of the Storm" is a great introductory cue with a full orchestra pounding away at our eardrums. Kamen doesn't hold back, and the blaring brass is a nice throwback to his more adventurous scores such as Die Hard and Robin Hood. Plenty of dramatic action fills this score, from "Into the Forest" to "Trance-former", as well as some softer emotional moments ("Annie and Dean"). The Czech Philharmonic Orchestra does an exceptional job performing the score, and I can see how (with their lower costs) more Hollywood productions are recording their music overseas.

No matter how much I really enjoyed this score, the notable lack of a theme bugged me. I can only hope that with Kamen reportedly set to score X-Men, he will come up with a great theme for that film – and then we can all forgive him for dropping the thematic ball on Iron Giant. Released through Varese Sarabande, this album runs a hearty 50 minutes, and is readily available in stores.