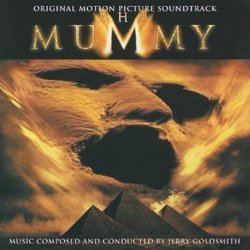 One of the first films of the Summer of '99, The Mummy reunited director Stephen Sommers with composer Jerry Goldsmith, having previously collaborated together on Deep Rising. Officially a remake of the original horror classic, The Mummy was updated with state-of-the-art visual effects, and the concept that the mummy wasn't a slow moving undead creature, but a fast moving, very strong, threatening monster that you were actually afraid of.

With a pre-title sequence beginning in ancient Egypt, the music begins very quietly over the Universal Studios logo, and quickly turns very ominous with a quiet choral wavering in the background. As the camera pulls back over the Egyptian pyramids, the music quietly swells, and hits a large brass theme as we realize we are looking at ancient Egypt in all of it's glory. This theme represnt Egypt. is very Middle-Eastern in style, and is very dark and ominous. Slowly the music turns into the romance theme for High Priest Imhotep who is having an affair with the Pharaoh's wife. Just as this theme hits its climax, we are interrupted by Pharaoh who brings us right back to Imhotep's theme. Plenty of choral bits and thematic climaxes ensue for the next two tracks as the prologue unfolds.

More music in the film, notably during some of the action sequences, contains very fast and complex orchestrations that are similar in structure to First Knight. While this works musically to convey action and thrilling suspense, it didn't work as well in the film as it should have. There were a few moments where I felt that the music made the scene less exciting, or less scary.

This is one of those rare situations that don't happen often, but when it happens, it puts me in an awkward situation. Film music is written solely for the film in which it is used. If it works on it's own merit, that's fine and great, but that's not the point. So as a film score, Goldsmith's The Mummy is only okay. It works for most of the scenes, except for a handful of the action sequences where I felt it dulled the excitement a bit. Now looking at the score as a listening experience, I think it is full of fun moments, and a ton of thematic material that makes it worth listening to.

Released on Decca Records (now part of the Universal Music Group), this score is surprisingly long for a Goldsmith release, at just over 57 minutes long. There is plenty of music here, and I think that you'll find it enjoyable to listen to, even if it didn't work for some of the movie.