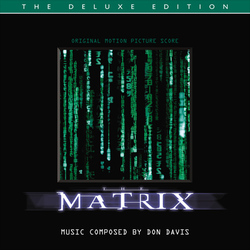 The Matrix: The Deluxe Edition

With the upcoming Warner Bros. "Ultimate Edition" of the entire Matrix saga, we thought this would be a good opportunity for our own "Deluxe Edition" of one of the most acclaimed and landmark scores of modern times. Now with over 78:00 of Don Davis' astoundingly powerful and complex score, film music fans can finally enjoy all the intricacies of this epic work.

Davis' score was performed live, just last year, as part of his "Matrix Symphony" performance at the inaugural Fimucite event in Tenerife. Don Davis went on to expand on his score with two sequels. But it was with this original masterpiece score that we all caught the trail of the white rabbit for the first time.

In the near future, Computer hacker Neo is contacted by underground freedom fighters who explain that reality as he understands it is actually a complex computer simulation called the Matrix. Created by a malevolent Artificial Intelligence, the Matrix hides the truth from humanity, allowing them to live a convincing, simulated life in 1999 while machines grow and harvest people to use as an ongoing energy source. The leader of the freedom fighters, Morpheus, believes Neo is "The One" who will lead humanity to freedom and overthrow the machines. Together with Trinity, Neo and Morpheus fight against the machine's enslavement of humanity as Neo begins to believe and accept his role as "The One."

This has been one of our most clamored-for deluxe editions for years so we thought it would make a great and special addition to our continuing Varese Sarabande 30th anniversary celebration. Take the red pill.