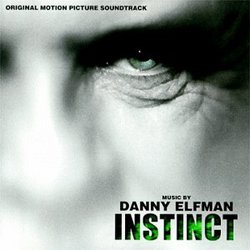 Director Jon Turtletaub hit it big when Sandra Bullock rose to stardom in While You Were Sleeping.After such light fare, Turtletaub turned slightly serious and somewhat less saccharine with Phenomenon.More box office receipts later - due mostly in part because of the red hot John Travolta - Turtletaub immersed himself into the novel Ishmael, later re-titled as we now know it, Instinct.

I can understand Danny Elfman's attraction to the film.Anthony Hopkins and Cuba Gooding Jr. teamed up together?Show me the money! (The film failed at the box office after all). Besides that, the premise is interesting and offers up some new territory for Elfman - the African element.After spending time in Africa traveling (and surviving a bout with Malaria) Danny Elfman must have seen and heard things that may have inspired his score for Instinct and indeed there are many inspired moments on Varese Sarabande's album.

The album churns into action with the highly percussive, MIDI-laden "Main Title".While no thematic statement is made, some motifs are introduced in this somewhat downbeat intro piece.The percolating midi samples are familiar to those who have heard or own Elfman albums like Mission: Impossible and A Simple Plan.A resonating bass line and soft choir flesh things out.

Perhaps the biggest difference between Instinct and Elfman's last scores: A Simple Plan and A Civil Action, is the inclusion of large brass sections.A Simple Plan was an uncompromising mix of percussion, strings, detuned piano and flutes.I know the score well and there is little to zero brass - the same goes for A Civil Action which foregoes brassy cues for midi percussion, Hammond Organ and gospel choir.Whereas A Simple Plan was largely a critically hailed score, A Civil Action never really got out of the gate for critics.Instinct sounds extremely fresh to my ears because of the brass work and therein lies it's hook.

Elfman seems to have taken the approach that this is a film that takes place not in Africa but in America - that the flashbacks are still rooted on American soil.So both sections of the film are scored in the same way.Cues with African percussion do in fact underscore the reflections of Ethan Powell (Hopkins), but never degenerate into jungle clichés.Instead, Elfman uses the choir to accentuate the delicacy of the relationship between Powell and the apes.It creates a heavenly feeling where we associate the gentle sighs from the chorus with the gentle beasts that Powell later becomes one of.Elfman's use of choir is also a major attribute.Not since Mars Attacks! has he used a choir to this extent.While it is more in the Good Will Hunting mode of softer "oohs" and "aahs", it's role in the score is much more dominant than GWH. The mammoth "Into The Wild" encompasses most of the softer choral work and is overall the most relaxing and enveloping track on the album."Into The Wild" wraps things up beautifully with a choral verse - the feeling is of great warmth - something not heard in an Elfman album in some time!

Speaking of such subjects, a major criticism leveled against Elfman these days is his lack of thematic oomph to tie his scores together. You can argue all day that a score needs a theme to make it memorable, but what really matters is how it serves the film.In fact, Instinct does have a theme; it just requires a deeper look/listen to find it. "Everybody Goes" is a wonderfully rich and emotional track.Starting at 1:30 into the cue, there is a warm and bold thematic statement.It is music for a pivotal scene and works like gangbusters in the film. On the album it induces a smile from this reviewer.

The major action cues on the album are clustered near the end of the album.After almost four minutes and thirty seconds all hell breaks loose in "The Killing".It's not hard to guess why!The first four minutes don't reveal what's to come - which is three minutes of pure dissonant, Elfman action.What appears to be unconstructed noise is actually a detailed musical representation of Powell's descent into uncontrollable, bloody, murder.The track rounds out with a heartfelt finale reminiscent of Elfman's Dolores Claiborne.

A second action cue comes in "The Riot" and is used to reflect the same melee from the jungle that resulted in Powell's surrogate simians being poached.More of the same from the prior track, it's echoes the failure of Theo (Gooding) to rescue Powell's mind.

Elfman isn't content to let the listener turn off the stereo with a frown on their face however. "Escape" is to Instinct what "Finale" was to Men In Black and Batman.Sprightly tinkling piano and midi percussion make beautiful dialogue underscore that gives way into a soaring, choral burst and crescendo.

The "End Credits" restate some main cues from the score rather nicely and wrap things up emotionally for the listener.Some of the midi percussion that kicks the track off induces memories of Wisdom.My single complaint lodged against the score is that the percussion isn't performed live and does have a synth-y feel to it.The album features the usual sonic excellence of Shawn Murphy but falls short on packaging with no notes on the score from Elfman or anyone else, which is typical of most of Varese's releases.Otherwise it's not hard to say that Elfman's music for Instinct picks up many of the nuances and emotions in Anthony Hopkins and Cuba Gooding Jr.'s performances that not even Jon Turtletaub did in his film.