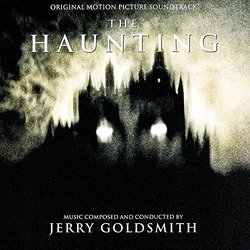 When I heard that they were making a new film based on "The Haunting of Hill House" by Shirley Jackson, I was mortified. I felt that the original film adaptation, The Haunting, by Robert Wise had been so enjoyable and affecting that to create another film treatment would ruin people's views of the story and not make the effort to see the original.

The theatrical teaser didn't change my views, but then the theatrical trailer was released, and the movie actually looked interesting. My main fear was that the subtle psychological suspense that proved so effective in the original film would be replaced with an overabundance of high tech visual effects. When I finally saw the film, my fears were realized.

One of the few saving graces of the film, however, was the score by veteran composer Jerry Goldsmith. Having worked on such horror classics as Poltergeist and The Omen, I was expecting him to take the same approach – but with his current style of writing (which seems to change every 8 years or so). I was pretty much right – his homely lullaby for Eleanor (Lily Taylor) was appropriately innocent, and his creepy theme (with full strings) for "the house" provided just the right amount of ominous suspense and foreboding in the scene that it was used. A carousel figures prominently into the story, and Goldsmith provided original organ music for those scenes – a nice circus piece that has a sense of darkness about it, but one that I would have to deem entirely inappropriate for the first track of a soundtrack album! (It seemed too harsh and abrasive to start off the CD – the lullaby would have been more appropriate.)

There is the right amount of "creepy" underscore for many of the "creepy" scenes in the film (although there were probably only two really good scares in the film), an adequate sampling of which is provided for on the CD, which runs a tad over 35 minutes long. Of course, the finale of the film is included, during which Goldsmith takes full advantage of the orchestra and sweetens it with synth elements which is something he does with complete mastery (ala Small Soldiers, The 'Burbs, The 13th Warrior, Mulan, etc.).

The movie wasn't worth seeing in the theater, and I would have some reservations about recommending it on videotape. But the score that Goldsmith provided helped make the film somewhat enjoyable – although if you want to see The Haunting, you're better off seeing the original black and white version. Sometimes horror films work best when your imagination is required to see what is behind that door – and not some fancy visual effect by ILM and Tippet Studios.