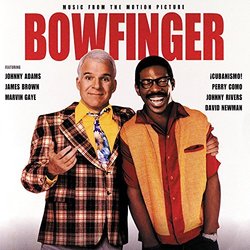 Performed by
The Bowfinger Band

The film Bowfinger pokes a lot of fun at the film industry. In fact, many of the jokes would go past many people unless they had a basic understanding of the filmmaking process, and its pitfalls. Starring Steve Martin as a film producer who thinks he has a hit film, and Eddie Murphy as both an A-list action star and his idiot brother, Bowfinger had a great funky, brassy score provided by David Newman.

Before Newman's score starts playing on the Varese Sarabande CD, we are treated to six songs that appeared in the film. "There is Always One More Time", performed by Johnny Adams, worked beautifully in the film while showing Bowfinger (Steve Martin) down on his luck. Other songs include "You're A Wonderful One", "And I Love You So", and James Brown's "Super Bad, Super Slick". But the best song in the film, Johnny Rivers' "Secret Agent Man", was used to perfection at the ending sequence in the film.

Newman's score feels like a part-jazz, part-funk comedy score. There is a lot of bass, percussion, brass, guitars, and (of course) a dirty organ. Overall, it fit the attitude of the movie perfectly. Even a string section is used to round out the score. Some of the tracks are cues merged together - as a comedy score, many of the cues are very very short, and it made sense to combine them together. One disappointing thing about the score is that it's rather short - only about 18 minutes worth. But it is still a rather satisfying listen that I'm sure will please most film music listeners. Definitely get this one if you enjoyed the film - and having "Secret Agent Man" on CD would have been enough of a reason for me!