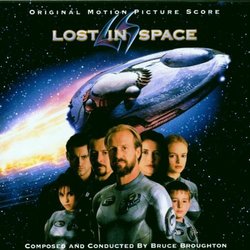 Back in 1998, one of the summer movies released was a feature film adaptation of the hit television show "Lost In Space". The production was wrought with problems - cast members came and went, and then when it came to post production, the film composers came and went. First Jerry Goldsmith, then Mark Isham, and finally veteran film composer Bruce Broughton was tapped to score this sci-fi action film.

Broughton is one of those film composers that know how to take advantage of an orchestra, without resorting to synthesized effects. With a sneaky oboe theme for the evil Dr. Smith, a large fanfare for the Robinson family, and others, this is without a doubt a very thematic score. Towards the beginning of the movie, when the Jupiter II spacecraft is hurtling towards the sun (and oblivion), Broughton expertly uses the orchestra to convey the necessary building tension while using the major themes from the movie.

One of my favorite tracks is "Robot Attack", which features some very fast driving string work accentuated by brass hits as Robot tries to destroy the Robinson family, and cripples the ship. Dr. Smith's theme shows up at the appropriate moments as well. Later on in the film, when the Jupiter II comes across the remains of the rescue ship (it's a rather interesting plot involving time travel), Broughton presents us with some very sad and ominous music - we know something bad is going to happen, but we just don't know what. This 10-minute track, "Spiders" includes all of the music on the rescue ship, including the very tense spider attack. "Will's Time Machine" has some very powerful chord sequences, all layered with an ominous, yet wondrous, air. "Through The Planet" allows us to revisit those wonderful fast driving strings which we first heard in "Robot Attack".

Lost in Space is one of those very thematic scores that seems to have written itself after the initial themes were worked out. Broughton came up with some very interesting character pieces, and then depending on the scene he was scoring, brought them together in the appropriate way. The romantic cues are soft and sweet, the action cues are full and engrossing. With a running time of 66:54 and released on the Intrada label, this CD is well worth getting - it is just a shame that in the end, the film wasn't as good as everyone hoped it would be. But with a new life on video and DVD, hopefully people will find this score worthy of adding to their collection.