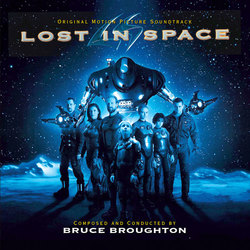 With the latest release from their long-standing relationship with composer Bruce Broughton, Intrada revisits Broughton's massive score to the 1998 film version of Lost in Space. Broughton had two-and-a-half weeks to score the film and that it's one of the richest, grandest scaled and most thematically compelling scores of his career is a testament to Broughton's professionalism and talent. Not only scored on a tight schedule, but the picture underwent numerous changes even as Broughton was attempting to finalize his score and record it with the Sinfonia of London. The composer had to write and record in haste and revise and re-score numerous sequences right up until the last minute. The resulting score is remarkably coherent, strongly melodic in its thematic elements, powerful in its majestic moments, and ferocious in its action sequences.