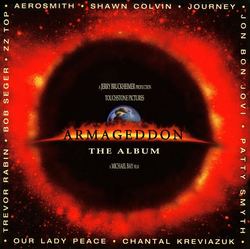 The soundtrack to the 1998 science fiction disaster thriller film directed by Michael Bay. The album was a multi-platinum international hit reaching #1 in the US and across the globe. The soundtrack is filled with tunes by major recording artists including Jon Bon Jovi, Journey, ZZ Top, Bob Seger & the Silver Bullet Band, Patty Smyth, Shawn Colvin and four tracks by Aerosmith.

Much of the success of the album was driven by the Aerosmith power ballad, "I Don't Want to Miss a Thing." The song, written by renowned pop songwriter Diane Warren, debuted at number one on the U.S. Billboard Hot 100 (the first #1 for the band after 28 years together). The other Aerosmith tracks are the rockin' "What Kind of Love Are You On," their 1991 Re-Mix of "Sweet Emotion" and their classic cover of the Beatles', "Come Together."

"I Don't Want to Miss a Thing" stayed at number one for four weeks and also reached # 1 in many countries around the world, including Australia, the Philippines, Germany, Ireland, Austria, Norway, Italy, the Netherlands, and Switzerland. In the UK, the song peaked at number four, becoming Aerosmith's highest charting song in the UK.

With the theme of the film being the prospect of a giant meteor crashing into the earth, it is only fitting that the soundtrack is packed with explosive hits and stars. The album features all the songs that rocked this movie blockbuster and became one of the best selling soundtracks in history.