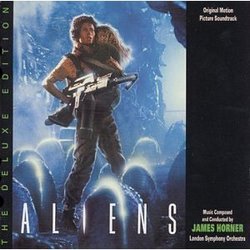 Horner's score begins with "Main Title", a cue utilizing atmosphere and percussion that quickly escalates into the (uncredited) "Gayanne Ballet Suite" by Aram Khachaturian, a piece that Horner would use frequently throughout not only Aliens but also throughout many successive scores.  The score ranges from this type of soft and quiet (and definitely creepy) underscore to eerie horror ("Bad Dreams", "Sub-Level 3", "FaceHuggers") and full-on action cues ("Ripley's Rescue", "Bishop's Countdown").  The use of military-style percussion and intense strings and brass so wonderful that it's no surprise many people consider Aliens to be one of Horner's best action scores.

Many of the cues restored to this album that were not included on the original 1986 release are either cues that appeared (in some form) in the film, or cues that weren't used at all.  One of those cues, "Combat Drop" is a rather thematic military track that sounds just a tad too much like Star Trek II: The Wrath of Khan for my liking - I can see why Cameron chose to drop it.  It's just a tad too upbeat and optimistic (with hints of the disaster to come), and was replaced with a martial drum pattern credited to Harry Rabinowitz.  It's unfortunate that the Rabinowitz cue wouldn't be included on the album - it would have been a great addition!  Other cues that were in the film (but not on the soundtrack) include "Bad Dreams", which uses sliding strings to great effect, and "LV-426", used when the marines arrive at the planet.

A key restored cue is "Queen To Bishop", key because in the film it was cut up and used multiple times throughout the film, and then heard in its entirety in the climax of the film (which is where this track fits).  It's great to hear this action cue, since it truly allows one to understand how the score was mixed up for the final film.  Also included are a few bonus cues.  Alternate versions of "Bad Dreams", "LV-426" and "Hyperspace" are included, for comparison (since they were intended for slightly longer edits of the film).  Also "percussion only" versions of "Ripley's Rescue" and "Combat Drop" are included - but while it makes for an interesting listen, it really serves no purpose.  (Why not provide us with a "string-section only" version of a cue?)  In its stead, I would have preferred that they add the Rabinowitz cue, or maybe even the two Goldsmith cues from Aliens that made their way into the final film.

Regardless of its shortcomings (which are few), this is certainly the "deluxe" edition of the Aliens soundtrack.  It's not a complete reflection of the score as heard in the film, but does do justice to Horner's original compositions, and allows us to hear them as he intended.  Enhanced by the wonderfully informative liner notes by soundtrack producer Nick Redman, this album is simply a must have.  I only hope that Varese continues this trend and revisits shorter albums from their past and reissues them as Deluxe Editions.