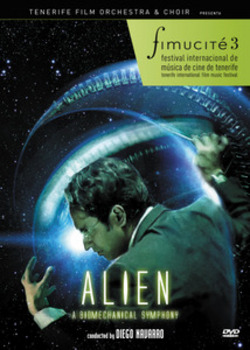 In July of 2009, we decided to mark the 30th anniversary of director Ridley Scott's groundbreaking 1979 film Alien by paying special tribute to Jerry Goldsmith's landmark score from the film at the closing night gala of Fimucité 3 in Tenerife. Specifically for this occasion, we created a unique symphonic work called Alien: A Biomechanical Symphony, which presented music from all four original Alien films (with the sequel scores being composed by James Horner, Elliot Goldenthal and John Frizzell). And, as a special encore, we also included Brian Tyler's exciting score to Aliens Vs. Predator: Requiem. Diego Navarro led the Tenerife Film Orchestra and Choir in this thrilling concert premiere.

For the first time you can actually watch the musicians as they perform such classic film music cues as Goldsmith's Breakaway, Horner's Futile Escape and Goldenthal's Adagio!

Diego Navarro's exhilarating performance of this music, was captured in stunning sound.

This 2-disc set includes a DVD of the concert and a CD of just the music. A beautiful DVD booklet (something that seems to be being left out of all but the most elaborate collector DVD sets these days) is also included.