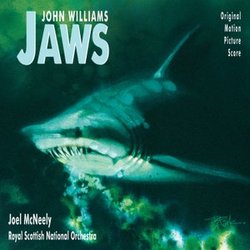 It is one of the most famous two-note themes. John Williams' award-winning score to Jaws still sends shivers down many spines. This year celebrated the 25th Anniversary of the film, and we saw a special edition video and DVD release, as well as a Anniversary Collector's Edition of the original score, with unreleased tracks. So many people were scratching their heads when Varese Sarabande released a re-recording of the original score.

The score is, as we can all agree, an excellent piece of work. So it was decided that Joel McNeely and the Royal Scottish National Orchestra would re-record the (then unavailable) complete score. Recorded in the fall of 1999 (and one day in May, 2000), everything was done for this release before the nice folks at Decca decided to release the original recording. So how do they compare?

The Varese album is technically quite good. The sound quality is very high, as expected for 20-bit digital, but the way it was mixed still feels like a concert recording instead of a closely-miked film score. The performance is mixed, however. I had gotten so used to the original recording that when certain notes weren't hit just right, it felt off-putting. In "The Main Title", the woodwinds seem to have more precedence than the strings in the low "dum-dum", and it had a different feel to it than I recalled it being in the film.

But those are minor complaints. There are parts of the score that are rather difficult to perform, and the RSNO does an admirable job tackling those cues. "Man Against Beast" is still one of my favorite cues, and while there were a few moments that didn't have the same type of energy or emphasis that I would have liked, it still stood out on the album as one of the better cues.