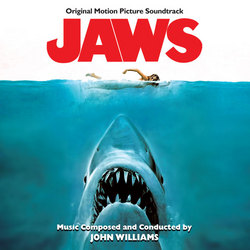 The theme from Jaws is one of the most iconic in all of film music. It not only communicates the mortal threat of a living killing machine, it performs double duty and fills in for the screen absence of the shark itself. The theme is the shark. It is the menace. And it is forever engrained in our minds.

Now, forty years after the 1975 release of the film, Intrada presents a special, 2-disc presentation of the iconic, Oscar-winning score. One disc features a reissue of the original MCA recording released in '75—a rerecorded, reworking of the score for commercial audiences that won Williams his first Grammy. The other disc features the original film tracks, sourced from the unmixed 1/2" elements, completely restored using state-of-the-art technology. These master tapes featured a nontraditional mix, allowing for the low strings—the force behind the shark—to be a dominant presence amongst the orchestra. While these tracks were previously released in 2000 featuring a stereo mix derived from the 5.1 DVD spread, its mixdown and added reverb took much of the punch out of the score. Going back to the original recording, engineer Mike Matessino was able to create a thrilling new experience and achieve a stunning sound, the likes of which have not been heard from this score before.

Most of the original score was presented on the 2000 Decca release, but in addition to the remastered quality the music is now presented in narrative sequence, with a few previously truncated phrases and one short unused cue added to the program. The original elements also yielded a healthy collection of "Extras" that include an alternate version of the "Main Title." Rounding out the disc with the 1975 album is a selection of source cues from the film, also previously unreleased. John Williams reviewed and approved this entire presentation.

This landmark release is the ultimate presentation of the music from Jaws and concludes Intrada's journey to restoring the music from all the four Jaws films.