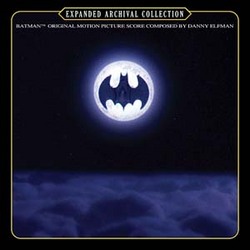 In order to present as much music as possible from Batman in the best possible quality, multiple sources were utilized with the best-quality elements selected for each cue on an individual basis. For disc one and the bonus cues on disc two, three sources were used: Eric Tomlinson's 35mm 4-track mixes, 1/4 inch stereo mixes and a stereo 35mm music only track. The album cues on disc two were sourced from the original digital album master featuring Shawn Murphy's stereo album mix.