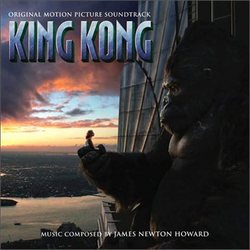 Peter Jackson\'s latest epic - a three hour re-telling of King Kong - needed music that would support the story and provide an emotional backbone to the relationship between Ann Darrow (Naomi Watts) and the 28-foot tall ape. Coming in at the last minute was composer James Newton Howard, and with only five weeks to write nearly 3-hours of music, his result is surprisingly resilient and effective.

The album opens the same way the movie starts - the art-deco opening titles of the film are displayed over the mysterious Skull Island Theme. Once the main title for King Kong appears, we hear the ape\'s motif - four brash low descending chords. The film starts out in 1933 New York City, where movie producer/director Carl Denham (Jack Black) is about to lose his funding. He has a map to an island that is rumored to have prehistoric creatures on it, and he plans on shooting his film there. When his lead actress is suddenly unavailable, he discovers Darrow, and convinces her to come on the voyage. Most of this music is presented in the tracks "A Fateful Meeting" and "Defeat is Always Momentary". The former being a more emotional track, and the latter being playful. Howard wrote a jazzy number to represent NYC and Anne\'s career as a vaudeville performer. Bits of it are heard in "Defeat is Always Momentary", and we\'ll hear more of it later on.

"It\'s in the Subtext" has a sweeping version of the Skull Island Theme, played almost as a love scene between Darrow and screenwriter Jack Driscoll (Adrien Brody). It\'s a lush track that leads into "Two Grand", a playful yet tense track that appears when Denham tries to stall Driscoll and keep him on the ship. Howard makes good use of the orchestra, bouncing motifs between various sections. "Last Blank Space on the Map" is where the pounding action begins. As the ship approaches Skull Island, it almost crashes into a wall, hidden by the fog bank. A very exciting sequence ensues as they try to get away, but the waves keep pushing the ship around until it\'s stuck against an outcropping. This is the kind of music that makes your palms sweat - especially in the theaters with the accompanying visuals.

Denham and his film crew depart for the island, and find that it is an empty ruin ("It\'s Deserted"). At least, it\'s empty until the natives show up and attack his party. This cue is another tense track, with a variation on the Skull Island Theme popping up. After they\'re rescued, they go back to the ship - but Ann is kidnapped by the natives and brought to be sacrificed to Kong. None of the music in those scenes made it on the album. Big epic orchestral moments herald Kong\'s arrival just as her rescue party shows up ("Something Monstrous... Neither Beast Nor Man").

When they get to Skull Island, however, things do not go as planned - Darrow is kidnapped by the locals, and "sacrificed" to Kong. A rescue party is sent out to find her, and in the process they get caught in the middle of a dinosaur stampede ("Head Towards the Animals"). This track has a nice brass chord motif that feels adventurish amidst the orchestral cacophony. You have to wonder how many tense cues in a row you have to endure before you can finally calm down and breathe - lucky for us, this album is not in film sequence! "Beautiful" is a tender moment between Ann and Kong as they watch the sun set. A soft melody on flute and piano with backing strings represents the budding relationship between Ann and Kong.

Of course, there\'s more action to come: "Tooth and Claw" is a rather intense action piece where we get to hear the heroic themes for Kong. An ascending chord motif, and a strong brass line that sounds like an inversion of the Skull Island Theme make a prominent appearance here. "That\'s All There Is" is for the moment where Ann bonds with Kong by doing her vaudeville routine. The playful jazz number mentioned earlier is heard in it\'s full rousing fom here. "Captured" continue the action, as Kong is trapped and subdued, and then the movie brings us back to New York. For the whole "escape" sequence, music from Max Steiner\'s original score to King Kong is used, and so it\'s not included on the album. "Central Park" gives us a lovely version of the melody heard in "Beautiful", as Kong and Ann reunite and have a little fun on the ice. Unfortunately, Kong is still considered a menace, and "The Empire State Building" starts out with a melancholy rendition of Kong\'s heroic theme as he ascends the great skyscraper. The last five tracks on the album are "Beauty Killed The Beast", and encompass most of the climactic battle between Kong and the airplanes atop the Empire State Building. The music is tense and dramatic, with moments of sadness, especially towards the end as Kong succumbs to the bullets. As he and Ann share a final moment ("Beauty Killed the Beast IV"), we hear the "Beautiful" theme again, and then boy soloist Ben Inman mournfully sings as Kong lets go and falls to the street below.

It\'s a very sad and emotional ending to the album. Overall, the disc has some great parts, although there aren\'t enough moments to breathe. This is also the problem with the film - but the time it ends, you feel as though you\'ve had sensory overload for three hours! With two hours of music missing from the album, and the short time in which to do it, this CD is actually a very good representation of the music in the movie. There are a lot of pieces missing that I would have liked to hear (the bug sequence, Ann\'s sacrifice to Kong, and more), but this is a very solid album that is sure to grow on you after you see the film. Howard is one of the best film composers we have, and King Kong helps remind us that he can deliver some great music under some impossibly hard conditions. It will fit nicely on a shelf next to Waterworld, Atlantis, Outbreak, and Dinosaur - adventure scores he\'s written that each stand out in their own ways.

With Peter Jackson\'s latest trend to do "expanded DVD" releases of his films, I wonder if James Newton Howard would come back to record new material for any scenes (although I personally can\'t see how they could make this film much longer). Regardless, there is plenty offered on this album to keep any fan of the movie satisfied - at least until an expanded soundtrack comes out sometime in the future.