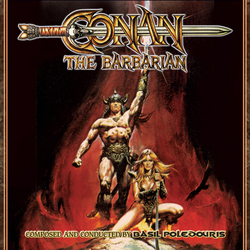 Basil Poledouris' score to the 1982 Universal film Conan the Barbarian remains the most impressive amongst his body of work. Poledouris delivered an impressive schematic of driving rhythm, charged strings and muscular brass that propelled the movie forward like the hammer of the gods.

For almost the first thirty minutes the music appears continuous, the various themes and motifs ebbing and flowing, dovetailing seamlessly. Playing for long stretches against dialogue-free visuals, the score completely creates the sound of Cimmeria—a credible world for Conan to inhabit, the music representing his inner turmoil, confusion, and rage.

For this new, definitive release of Conan The Barbarian, Intrada's 3-CD set is a box of delights even for those who know this fabulous music inside and out. Recorded in Italy by two separate orchestras and remixed from the original 24-track multi-track masters, it is now presented in a way that would make even Basil proud; it shines with a new clarity, a resonance and breadth of scope that makes the whole experience feel fresh and vibrant.

The original soundtrack album and its subsequent reissues from 1/4" masters always had a "pinched" quality to them. And this definitive Intrada set contains a host of alternates and unheard treasures. Just in time for the 30th anniversary of the film's release, this new collection of everything Basil recorded for the film is an emotional high—pure joy for collectors and cultists everywhere.