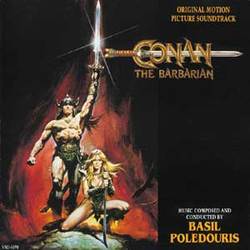 A child of the Year of the Monkey 1980, I came to this world a little too late to get caught up in the Western world's enthusiasm for the sword and sorcery epics and their parade of well-oiled bodies, primal love making, unspiced red meats and graphic life taking. Conan the Barbarian was by all accounts the crowning achievement of this dubious film making spree, and it's not hard to see why. Despite the unpromising pulp origins of the film's hero and the acting resume of its lead actor Arnold Schwarzenegger, director John Milius grounded his pre-Sumerian fantasy in a level of reality sorely lacking in most other fantasy films (even Barbarian's inauspicious sequel Conan the Destroyer). And while we're a long way from The Lord of the Rings, the characters of the film are memorable. Milius took time for characterisation and inserted action when it was needed, a formula that is more often than not reversed in films of this type. Finally for all the film's ridiculousness – enshrined in that cheesy-as-cheddar prologue spoken by Mako – Milius resists the temptation to play the silliness self-consciously (as say Stephen Sommers would), but revels in the earnestness of Conan's personal quest for revenge against Thulsa Doom.

The spirit of earnestness is ably supported by Basil Poledouris' score. The film's signature piece "Anvil of Crom" thunders out of the gate with its 24 French horns (seriously) and stamping 5/4 percussion, pausing for a moment for strings and brass to introduce the noble 'Steel' theme as Conan's father forges a sword of Atlantean steel, before the 5/4 rhythm and warlike brass return to carry the cue to a resounding conclusion. (The track was sufficiently impressive to have been reworked by Jerry Goldsmith for the main titles of his Total Recall score.) Out of the rubble of Crom's musical onslaught, the "Steel" theme is stated for oboe over a bed of string arpeggios in the lovely "Riddle of Steel". A brass fanfare heralds the onslaught of the "Riders of Doom" – whose plundering rampage is scored with a furious piece for Latin choir and full orchestra that makes Orff's "Carmina Burina" look pallid. Together the two opening tracks constitute one of the most bravura opening sequences of any film score.

And the rest of the score offers ample variety to make the album time fly by. Poledouris reworks his themes for Steel and Thulsa Doom's Riders – adding his own take on "Dies Irae" – for the traumatic "Gift of Fury". Out of the wonderfully visual metallic grinding motif for "The Wheel of Fury" arises a stunning brass take on the Steel theme. Strings and celeste add an air of mysticism that one normally associates with Miklos Rozsa to "The Atlantean Sword". It's followed by an album highlight in the light-hearted theme for Conan's Mongol sidekick Subotai, presented as a splendid dialogue for cor anglais and clarinet in "Theology / Civilization", widening to the strings to make a truly joyful antidote to the oppressive feel of the preceding tracks. Equally impressive is the love theme for Conan and Valeria, stated for viola and oboe in "Wifeing (Theme of Love)", then for strings as oboe reprises Conan's Steel theme in counterpoint.

This thematic base is drawn upon and extended in the second half of the album. "The Search" offers two sublime themes for Conan's journey to Doom's Mountain of Power, both themes traded between oboe, cor anglais and strings before the ubiquitous Steel theme rears its head again in a stately brass reprise. The allure of Thulsa Doom is well served by the balletic cue for "The Orgy". Minor motifs – including a cor anglais theme for Mourning - circle an earnest reprise of the love theme in "The Funeral Pyre". Even Conan's wizard friend (played by Mako) is given his own playful motif for clarinet and flute in "Battle of the Mounds, Part One", heard shortly before a return to the combative brass and choir associated with the Doom's saddled minions. A female choir intones a lament for the directionless "Orphans of Doom" with yet another theme, before a subdued setting of the Mourning and Steel themes carries "The Awakening" to its bombastic (though slightly abrupt) finale.

The Varese album adds to the already impressive twelve-track Milan album with an additional twenty minutes of music, extending two cues and adding four others. While the additional tracks do not include a great amount of unreleased thematic material, the established themes are explored in fresh arrangements. "The Leaving" offers a more extended oboe and string treatments of the love theme, and coupled with the already released "The Searching" becomes the highlight of the softer tracks on the album. A bombastic march that seems to have escaped from a Miklos Rozsa score dominates "The Mountain of Power / Procession", seguing into an alluring anticipation of the Orgy theme in the strings towards the end of its length. Poledouris rarely employs dissonant textures in his writing, and 'The Tree of Woe' is a nice hint of what he might come up with if so inclined. The harsh track bursts into a string reprise of the wonderful but little used theme for Subotai, before relaxing into the love theme. The Steel theme is given additional development in "Recovery", the typical woodwind/brass arrangement complemented by female chorus. Injecting a much needed dose of humour in the second half of the album is the comical treatment of the "Riders of Doom" motif that opens the extended "The Kitchen / The Orgy". Finally, the inclusion of "The Death of Rexor" (which also includes the cue for the death of Thulsa Doom) makes for a more satisfying extended climax on album. The dissonant chorus from "The Gift of Fury" returns in this penultimate track, putting the soothing choral opening of "Orphans of Doom" in context.

Listening to Varese album again in preparation for this review brought back memories of the same weaknesses that plagued the Milan album. Impressive as Poledouris' writing for orchestra and chorus was, the performing group – the Orchestra and Chorus of Santa Cecilia and the Radio Symphony of Rome – was not entirely up to the challenges it presented and the flaws are noticeable. In the iconic concluding stretch of the "Anvil of Crom", the augmented brass section races ahead of the percussion, while more than one flub mars the extended "The Kitchen / The Orgy" cue from the Varese release. Such a composition as this surely demands a rerecording by a more able performing group.

The mixing of the album is either a strength or a weakness depending on how you look at it. The sound design seems almost arbitrary – "barbaric" even if you'll mind the pun – often giving insufficient attention to key sections of the orchestra during critical moments. Of course the "rough edges" aesthetic, together with the quirks in performance, does add to the feeling that this recording actually is an ancient work that has survived the long years from the "days of high adventure".

One thing that is never weakened by either performance or mixing is Poledouris' writing for woodwinds. Every time I listen to this score I'm struck by the sense of drama imparted by Poledouris' deft handling of the oboe and cor anglais. They've always been magical in this composer's hands (see Les Miserables and Farewell to the King as well), and in Conan they continually outshine the brass and choral writing often emphasized by reviewers. Performances of the many solos parts for these instruments (in "Riddle of Steel", "Theology/Civilization", "Wifeing", "The Leaving / The Search", "Recovery" and "The Funeral Pyre" to name the most obvious examples) are fine indeed, and they are never drowned out by the other sections of the orchestra. The more recent album releases for Howard Shore's Lord of the Rings scores might have benefited greatly from similar clarity in the woodwind solo parts.

Ultimately, compared to the quality of Poledouris' writing for Conan the Barbarian, the flaws of either album incarnation shrink in comparison. Fans of orchestral film scoring simply must have some version of this music in their collection, and the question not whether to buy but which version to buy. While the Varese album offers a superior presentation of the film's score, the Milan is easier to find, and cheaper as well. Those with a special interest in this score or film will of course favour the former, and to them is highly recommended with its excellent liner notes by Kevin Mullhall. To those who do not know the film, but are eager to sample the legendary score, the Milan edition is an excellent album containing all the main themes in their iconic arrangements in a thrilling fifty minutes of underscore. Purchasers of the Milan edition have the added feature – again, whether it's a strength or a weakness is debatable – of hearing the classic opening narration by Mako. (Personally I feel Varese was most prudent in their removal of this cue from their expanded release.)

Of course one hopes that before long a Deluxe edition of this score – akin to Varese's expanded Total Recall score – or a complete rerecording (by a more able performing group) may be made available to film score fans. Significant unreleased cues such as Conan's Gladiator Montage, the Temple Theft sequence, the post-orgy battle with Rexor and some unreleased music from the climactic Battle of the Mounds would be welcome additions to what is already one of the best film scores in history.