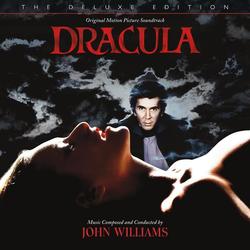 John Badham directed this 1979 telling of Dracula's tale. John Williams was absolutely on fire at this time. There were Star Wars and Close Encounters of the Third Kind in 1977. The Fury, Jaws 2 and Superman all from 1978. And then came Draculain 1979. It was a magical time and this was another masterpiece. Dracula features one of John Williams' most brilliant and iconic themes. He admittedly has so many but he certainly captured the mythical Count in a darkly romantic and seductive way.

For this Deluxe Edition we have expanded the original 36:00 album selection to a whopping 72:00, including cues not heard in the final cut of the picture. This is a very important resurrection! Mike Matessino undertook the new 2018 mix of the score. Due to its own unique assembly, which represents John Williams' own album vision from 1979, we have included a newly-mastered-from-a-new-source presentation of the originally soundtrack album as Disc 2.

The truly deluxe packaging includes a 2-CD set, a 36-page book and a 12-page booklet all in a beautifully designed Dracula slipcase box. Here's a release we can all celebrate!