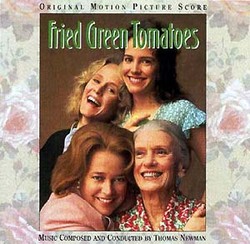 Thomas Newman fans have long maligned the difficulty of obtaining a copy of this soundtrack and it\'s easy to understand why. As I write this, the only CD copies available on Amazon.com begin at US$109. Sure, three of the tracks ("Ghost Train", "A Charge To Keep I Have" and "Visiting Ruth") are included on the soundtrack album along with a motley bunch of songs, but Newman purists will want to ensure that they have the entire score at their disposal. Apparently, there is a function on a deluxe edition of the DVD that allows you to listen to the isolated score track. If you\'re a bit maniacal like me, though, you\'ll like to have the official score album, which I was fortunate enough to stumble across at a regular music store in 1995. I have always treasured it dearly. It is one of Newman\'s finest efforts and, arguably, marked the turning point of his ventures into loftier dramatic projects after early work such as Revenge of the Nerds and The Lost Boys.

Based on Fannie Flagg\'s novel Fried Green Tomatoes at the Whistle Stop Café, the movie (bearing a wisely pruned title) presents stories of Southern women from two different eras. In the present-day, we follow the misadventures of Evelyn Couch (Kathy Bates) who is stuck in a menopausal rut until, during a nursing home visit, she meets Ninny (Jessica Tandy) and strikes up a friendship. Evelyn devours Ninny\'s stories of yesteryear, particularly when they involve headstrong Idgie Threadgoode (Mary Stuart Masterson) and sweet Ruth (Mary Louise Parker), two Southern women whose bond sees them through a harsh era of sexual and racial oppression.

It\'s a finely crafted and evocative drama, with a rich period feel that is only enhanced by Newman\'s superb score. Opening with a gentle clarinet rendition of the central theme, then building into a rollicking gospel-tinged style, the main title track, "Ghost Train", establishes both the mystery elements of the story and the sturdy Southern spirit of the central characters. There are times when Newman\'s blaring horns evoke the exultant release of a train whistle blowing. The feelgood motifs of this cue are echoed later in "The Bee Charmer" and in both versions of "Night Baseball".

Like a number of others in the score, these tracks feature the soulful voice of gospel legend Marion Williams, to whom the film was dedicated. Her octave-bending rendition of "A Charge To Keep I Have", an 18th Century English hymn by Charles Wesley, is here in a totally a cappella arrangement, as well as functioning in fragments as a soulful counterpoint during cues like "Night Baseball", where it bolsters the upbeat scoring, and "Big George", where it suggests the presence of restless ghosts. On "Didn\'t It Rain", Williams gets the chance to break out in a full-tilt gospel rock hymn.

The remainder of Newman\'s score veers appropriately between a variety of moods. The quieter, more melancholy tracks, such as "Buddy Threadgoode" and "The Smell of Coffee", make use of a truly intoxicating central theme, based around a fluttery clarinet motif. Typically, but also very satisfyingly, this theme gets a full orchestral treatment in the moving closing track, "The Whistle Stop Café". A secondary theme, also based around short clarinet phrases, underlines some of the film\'s sadder moments, such as in "Whither Thou Goest I Will Go" and "Miss Otis Died".

Then there are moments of pure musical bliss. It\'s easy to see why "Visiting Ruth" made it onto the soundtrack album, as well as featuring here. Its lilting clarinet and oboe duet perfectly evokes Ruth\'s resigned beauty, helping us to see why Idgie would be so smitten with her. "Xmas in Hooverville" brings back the stirring horns of the opening track to underscore Ruth and Idgie\'s liberating trainride through a nearby slum. But there are some moments of bitterness too. "Klansmen" and "Big George" utilise minor intervals to generate tension around Ruth and Idgie\'s involvement in the murder of a well-known member of the KKK, also Ruth\'s ex-husband.

Don\'t let the slender running time put you off. This is a score where every note counts. I have little doubt that it is one of Thomas Newman\'s finest. It should be sought out hungrily by any of Newman\'s devotees.