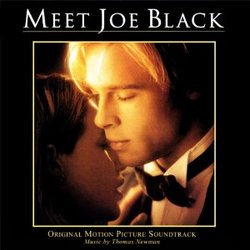 by Josh Wisch November 12, 1998
5 / 5 Stars
I went into this film probably more interested in the music than in the film. I'm only mildly familiar with Martin Brest, but I am definitely a fan of Thomas Newman's. His scores for How to Make an American Quilt and Little Women are two of the most hauntingly beautiful scores I have heard. They both have a certain restrained, intense passion to them that sends shivers down my spine each time I sit down to listen. Out of many current composers for film, Newman takes one of the more "classical" approaches to scoring. His music has a timelessness to it.

The score for Meet Joe Black has these elements, and a few more. It also has many dark undertones that were not found lurking anywhere in Quilt or Women. Considering the story, this makes sense. Pitt plays Death, come to roam among humans in the body of a newly deceased pro bono lawyer. He approaches Hopkins' character with a proposition: I give you an extension on life in return for you giving me a tour of your world. He chooses Hopkins for his success in life, and the wisdom that comes with it. Along the way, he just happens to fall head over heels with Claire Forlani, Hopkins' daughter in the film. Nothing good, of course, can come of flirting with death, and the story progresses from there.

I would not say that the music is as consistent as some of Newman's past scores, but it is stirring. In addition to having some dark undertones, it is laced periodically with an almost mythical and magical feel. "Peanut Butter Man" (Track 5) especially uses some interesting devices to get the listener's attention, and temporarily transport him someplace else.

The main theme contains full tones that lay a grounding for the characters' emotions. This creates a unique feel because the music wanders between the ethereal, the dark, and the earthy. This provides a nice thematic link to the film's philosophical journey between life, death, and the afterlife. At times, the score was reminiscent of Dances With Wolves, Edward Scissorhands, Dracula, and How to Make and Ameican Quilt.

I would recommend the score to someone who is in the mood for a deeply romantic piece. At the end of the day, that's what this score is. Romantic in all the classical senses: deep, stirring strings representing stormy emotions, Copland-esque strings showing the lightness of the the most cliched love at first sight, bells and horns signifiying the magic of a love that can never be and should never be, and the frantic orchestra telling of the darkness of the potential damage love and friendship can cause. Newman has put together a somewhat eclectic piece, but one which I definitely enjoyed. But then, I'm a hopeless romantic. For all you other hopeless romantics out there, (especially those who appreciate a sense of doomed love), this one's for you. It's the kind of score that will put you in an introspective mood. While you're driving, the falling autumn leaves will feel epic, and when you're sitting at home, your heart will pick up a special intensity. It's the kind of score I appreciated more with each concurrent listening session.