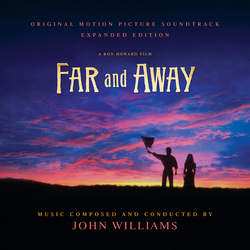 Far and Away - Expanded

La-La Land Records, in association with Universal Pictures, Imagine Entertainment and Geffen Records, proudly present the remastered and expanded 2-CD reissue of renowned composer John Williams' original motion picture score to the 1992 period drama Far and Away, starring Tom Cruise and Nicole Kidman, directed by Ron Howard and produced by Brian Grazer, Ron Howard and Bob Dolman. Maestro John Williams unleashes a powerhouse orchestral score for this lavish and historic romantic epic, set against the giant canvas of the Oklahoma Land Rush of the early 1890s. With powerful contributions from legendary Irish musicmakers The Chieftains, Williams creates a musicscape that swells with traditional Irish sounds and themes—expertly blended within the dramatic and romantic orchestral swirl. This restored 2-CD release showcases this glorious music in deluxe fashion – with the composer's original score as recorded for the film expanded beyond its original 1992 soundtrack and featuring a selection of alternate cues. Produced, edited and mastered by Mike Matessino and supervised by the composer, this expanded 2-CD program also takes you behind the film and its score with Matessino's exclusive liner notes. Jim Titus provides the classic art direction.