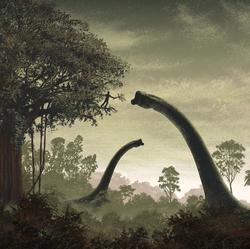 We are pleased to officially announce that we will be releasing the beloved soundtrack to Jurassic Park by John Williams on 2XLP Vinyl on the 21st anniversary of the films theatrical release.

There are two different versions. One, with artwork you might be familiar with by JC Richard that we are referring to as Version A. Version A, is pressed on 180 gram Black Vinyl, with randomly inserted "Dilophosaurus" colored Vinyl.

Version B, featuring all new artwork by Dan McCarthy, is limited to 1,000 copies and is pressed on 180 Gram Translucent Amber Vinyl.